Last week I mentioned that I had once dug into the subject of filling vacancies on the DC Circuit Court. I wanted to find out what the official objection to Obama’s nominees was:

The party-line answer, it turned out, was pretty straightforward: The DC Circuit doesn’t really have a very heavy caseload, so it doesn’t need any more judges. As you can imagine, this is a very handy argument indeed, since it means that Republicans don’t really need to cast around for a pretend reason to oppose Srinivasan or any of Obama’s other nominees. They can just oppose them all.

But that was a couple of years ago. Is it still the official party line? Yes! Ian Millhiser reports today that Sen. Chuck Grassley (R–IA) has introduced a bill that would simply slash the 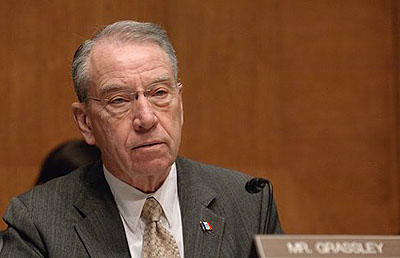 number of seats on the DC Circuit and put a stop to any further Obama nominees completely. Here’s Grassley:

As most of my colleagues know, the D.C. Circuit is the least busy circuit in the country. In fact, it ranks last or almost last in nearly every category that measures workload….Given this imbalance in workload, today I am introducing the Court Efficiency Act. A number of my colleagues are co-sponsoring the legislation, including Senators Hatch, Sessions, Graham, Cornyn, Lee, Cruz and Flake.

This legislation is straightforward. It would add a seat to the Second and the Eleventh Circuits. At the same time, it would reduce the number of authorized judgeships for the D.C. Circuit from 11 to 8.

So there you go! Just cut the size of the court from 11 to 8 and there’s no need to confirm any more pesky Democratic nominees. The court can continue handing off its overflow caseload to its retired senior judges, almost all of whom are safely Republican.

You can (and should) go read Millhiser for more detail about the reality of the DC court’s caseload and why Grassley and his little gang of cosponsors are full of shit. Or you can just accept the obvious: this has no basis in fact or policy. It’s simply another transparent Republican power play designed to maintain their stranglehold on the federal bureaucracy.

But I think it does answer a question. It’s possible that Republicans will agree to confirm Sri Srinivasan to the DC Circuit. He’d be the eighth judge, and he’s practically a gift to them anyway. But after that they haven’t the slightest intention of allowing any further vacancies to be filled. Not by Obama, anyway.