Today, Andrew Gelman points to a piece written a couple of months ago by Alex Engler that takes a look at just this question. Engler assumed a voter turnout of 42 percent and then examined the 20 congressional districts for each party that were most likely to switch sides based on shifts in the Hispanic vote: 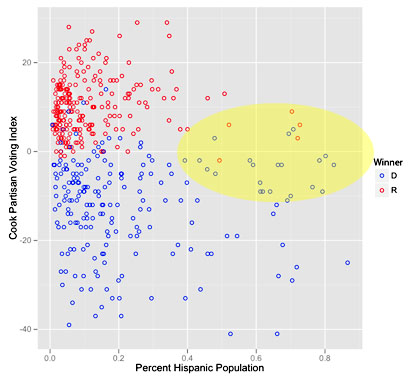 shifts away from Democrats by Hispanics could be devastating. Under the 42 percent scenario….a 10 percentage point shift to the right would have handed Republicans 12 seats.

The basic insight here is that Democrats already get such a high percentage of the Hispanic vote that another few points wouldn’t do them much good. But just the opposite is true for Republicans. The chart on the right shows this graphically. The area outlined in yellow represents congressional districts that are (a) heavily Hispanic and (b) in play. There are only a few currently in Republican hands, so even if immigration reform helps Democrats, it won’t do them much good. But there are about 20 currently in Democratic hands. If depriving Democrats of immigration reform as an issue hurts them, Republicans could make significant gains.

This doesn’t answer the question of which party immigration reform is likely to help. What it does say is that it’s a no-lose proposition for Republicans. Even if it turns out to help Democrats more, Republicans aren’t likely to suffer much because of it.

Most incumbent Republicans will not have a strong incentive to vote for an immigration bill containing a path to citizenship if a significant Hispanic population appears to be lacking in their districts. In fact, many conservatives may be far more concerned about primary challengers than Hispanic backlash.

On the other hand, the Republican Party as a whole has a tremendous opportunity to turn districts in their favor. If they can redefine themselves to the Hispanic population, starting with comprehensive immigration reform, they will be doing more than pouring water on the DCCC’s gunpowder—they will be stealing it for themselves.

This suggests that GOP party leaders probably should push hard to get Republican support for immigration reform. It also means that if they don’t push hard, it’s pretty likely to fail. It’s an interesting analysis.