I feel the need to write about something that’s as far removed from Benghazi as humanly possible. How about Isaac Newton? As we all know, he invented calculus, the theory of gravity, and Newtonian mechanics, as well as conducting pioneering work in optics. But I’m reading a book called Newton and the Origin of Civilization right now,1 and I’ve learned to my surprise that he invented something else that was similarly groundbreaking. Read on for more.

Observational science was as important in the 17th century as it is today, and Newton has long had a reputation as a master of precise observation. But one way or another, observations of that era all depended on the human eye. Some were unaided, while others depended on instruments, but in the end, their accuracy was still no better than that of the observer, and scientists of the day—very much including Newton—were well aware that human observation was imperfect. The usual way of handling this was to make a series of observations and then pick out the one that seemed most accurate. Newton, however, invented a revolutionary new method in 1671 while he was measuring the differences in the diameters 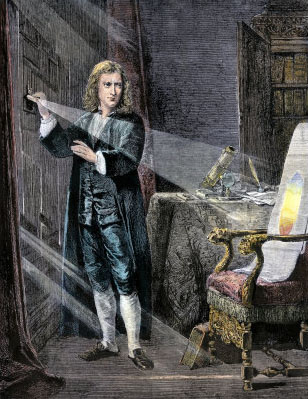 of the rings produced when a spherical lens is pressed against a plate of glass—the phenomenon later termed “Newton’s rings”:

Newton did something unusual, and even, as Alan Shapiro notes, “almost [we would say entirely] unprecedented in the 17th century”: he averaged all of the differences….None of this reached print….Newton certainly avoided hinting in print that his law of arithmetical progression was adduced by anything other than the most skillful and precise of measurements.

….Newton’s “mean”—the average—was the weapon with which he slew the invevitable dragons of sensual errors. It was a most paradoxical weapon for the times, because it amounted to a method by which error seems to be reduced by committing it repeatedly. No such method appears elsewhere at the time, and it would certainly have seemed odd, to say the least, to most practitioners of the period.

….We have no contemporary record of the reasoning by which he justified this unusual method….Yet Newton used averages early on; he used them frequently and, it seems, consistently….Why did Molyneux and Flamsteed, a decade or two later, do so as well?….Is there some evidence as to what underpinned the average, decades before statistical notions became widespread?

Apparently the answer to that last question is no. The authors produce a bit of evidence that Newton thought of the average as akin to measuring a center of gravity, but that’s about it. It appears that Newton never explained himself, but just quietly went ahead with his use of  averages several decades before anyone else. It was the secret behind his famously accurate observations.

So how about that? Newton invented the now-standard method for reducing noise in measurements, and did it apparently by pure intuition, long before anyone (including Newton) suspected there was a rigorous mathematical basis for doing so. Also—and this is par for the course—he kept it a secret. So chalk up another amazing discovery for old Isaac.

1Actually, reading might be too strong a word. It’s a long, dense monograph about Newton’s obsession with ancient chronology, which joins alchemy, numerology, and Biblical exegesis among his somewhat less successful endeavors. So I’m sort of dipping into the book here and there, not really giving it a thorough read.