A couple of hours ago I had a choice to make: spend the next hour writing a reaction to President Obama’s big national security speech, or go to lunch. I went to lunch.

That was all for the best, since I had mixed reactions to the speech and wasn’t quite sure what to say about it. It was long and thoughtful, and in a lot of places its tone was welcome: Al-Qaeda is on the run, Obama said, and the danger we now face is of a much smaller scale than it was 12 years 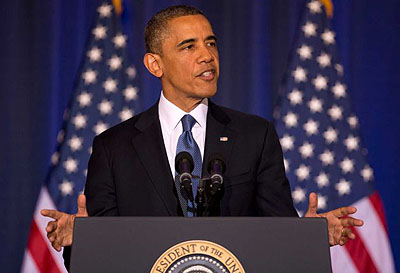 ago. So it’s time to rethink just how we want to prosecute our eternal war against terrorists:

America is at a crossroads. We must define the nature and scope of this struggle, or else it will define us, mindful of James Madison’s warning that “No nation could preserve its freedom in the midst of continual warfare.” Neither I, nor any President, can promise the total defeat of terror. We will never erase the evil that lies in the hearts of some human beings, nor stamp out every danger to our open society. What we can do — what we must do — is dismantle networks that pose a direct danger, and make it less likely for new groups to gain a foothold, all while maintaining the freedoms and ideals that we defend. To define that strategy, we must make decisions based not on fear, but hard-earned wisdom. And that begins with understanding the threat we face.

Afterward, administration officials told reporters that Obama had announced a new drone policy in his speech, though you could be excused for missing it: in the future, “strikes will be authorized only against militants who pose ‘a continuing, imminent threat,’ aides said, instead of ‘a significant threat,’ which had been the previous standard.” That’s a mighty thin difference, especially with no external oversight to ensure that it’s followed. And aside from that there were damn few specifics. Generally speaking, Obama defended drone attacks, defended the targeting of U.S. citizens abroad, and defended his aggressive prosecution of leakers. And while he suggested he was open to both more executive oversight and to a change in tactics, I think Dave Weigel was shrewd to highlight Obama’s insistence that he couldn’t do this on his own. Ed Kilgore summarizes:

Obama four times shifted responsibility for current dilemmas at least partially to Congress: on drones (where he insisted the appropriate congressional committees have known about every single strike); on embassy security; on the 9/11-era legal regime that still governs anti-terrorist efforts; and on Gitmo (where Republicans have repeatedly thwarted effort to transfer detainees to U.S. prisons). [And a fifth: a media shield law to protect journalists who report classified information. –ed.]

Is this a reflection of reality or an example of buck passing? I’m not sure we know yet. As someone who has consistently highlighted the power of Congress over policy—even foreign policy—I’m inclined to say the former. But it all depends on exactly what Obama does going forward. If Congress takes him up on his offer to rein in executive power and provide more oversight, will he cooperate or fight? He didn’t say enough today to make that clear. He just said he was ready for a conversation.

So let’s have it. As Heather Hurlburt points out, Obama’s speech was a beginning, not an end. David Corn has more here.