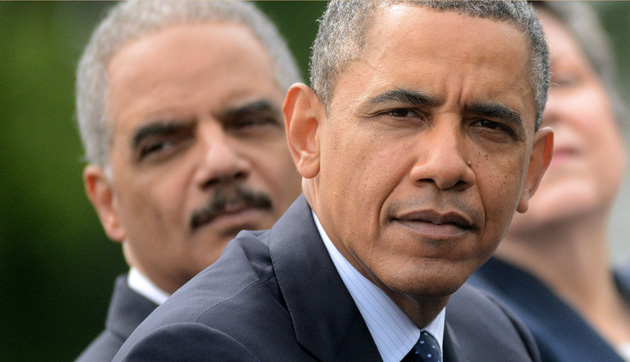 Did I, as a liberal columnist who called immediately on President Obama to seek Eric Holder’s resignation over the Associated Press scandal, provide aid and comfort to the enemy? First of all, I don’t care—what happened struck me as a serious abuse of power….And second, no, I don’t think I provided them aid and comfort anyway. In fact I think recent history shows beyond a doubt that foot-dragging and avoidance are the true aid-and-comforters; they always, always, always make these things worse.

…Obama may want to keep Holder because he thinks he’s a fine attorney general, and if that’s the case, well, then I guess it’s the case. But if he thinks this scandal is bad and Holder’s response is lame, he should cut him loose, and the sooner the better. I dispute in the strongest possible terms the mentality that says, “But that would just be giving the GOP a scalp.” No. It would be showing the American people, most of whom don’t think in terms of scalps, that some things cross your own moral line. It invests you with character.

A couple of things leap immediately to mind. First, I suspect that Obama heartily approves of what the Justice Department did in the AP leak investigation. It’s probably a fantasy to believe that either Holder or DOJ were off the reservation here. Second, I suspect that the American public doesn’t view this as a scandal in the first place, so firing Holder wouldn’t do Obama any good. The public’s view of the press is pretty dim—television news in particular ranks right up there with banks and HMOs—and I’ll bet a sizable majority actively approves of reining in those elitist media bellyachers who are constantly hiding behind the skirts of the First Amendment as they carelessly compromise national security by publishing leaks of terrorist investigations.

Needless to say, this isn’t my view. But the media is in a huge lather about the AP case because it affects the media, and I have a feeling that we journalist types are vastly overestimating how strongly the public is on our side over this. Sometime soon I imagine we’ll get a few polls with a few different question wordings that will give us some idea of where we stand. Just don’t be surprised if it turns out the public doesn’t think as highly of us as we ourselves do.