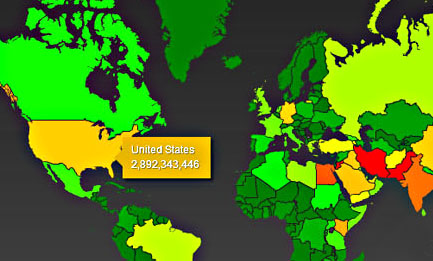 The Guardian has gotten access to information about an NSA program that categorizes the information it collects:

The Guardian has acquired top-secret documents about the NSA datamining tool, called Boundless Informant, that details and even maps by country the voluminous amount of information it collects from computer and telephone networks. The focus of the internal NSA tool is on counting and categorizing the records of communications, known as metadata, rather than the content of an email or instant message.

It’s hard to know what to think of this. The map shows which countries are surveilled most intensively, and it turns out that NSA collected about 3 billion pieces of data on U.S. communications over a one-month period this year. That’s a lot. On the other hand, it turns out that this is only about 3 percent of the total that NSA collects globally, which suggests that their focus really is pretty emphatically on non-U.S. communications.

On a side note, geeks might be interested to know that Boundless Informant—yet another great NSA name, no?—is hosted on free and open-source software. Congrats, open source movement!

UPDATE: It’s probably worth noting that the 3 billion number is for DNI data—Digital Network Intelligence. Data collection from American sources makes up about 3 percent of the global total of DNI. But in the same month, NSA also collected about 124 million pieces of DNR data—Dial Number Recognition. It’s possible that the U.S. percentage of this is much greater than 3 percent. But we don’t know.

It’s also worth noting that these numbers appear to relate to the source of the data, not the nationality of the person being surveilled. Those are two different things.