Pew is out with the first poll asking the public what it thinks of the NSA phone record surveillance program. Unsurprisingly, the public thinks it’s just peachy, by a margin of 56-41. What is surprising, though, is the epic size of the change in partisan attitudes since 2006. Back 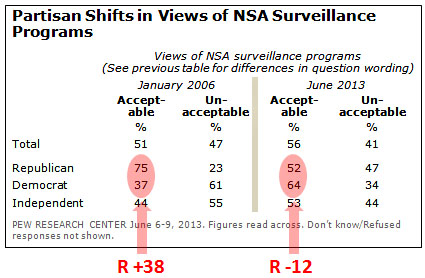 This isn’t the last word on the subject. The wording of the question is different this year compared to 2006, and that might account for a bit of the difference. But probably not much. Basically, when Bush was president, Republicans thought that monitoring telephone traffic was a great idea. Now, when Obama is president, they’re not so sure—but Democrats think it’s fine and dandy. This is about as remarkable a turnaround as I’ve seen on any subject in recent years.

Unfortunately, it’s going to be harder than I thought to eventually get a firm read on this. I had figured that early polls would be tentative because so few people would understand what the NSA program entails (i.e., legal vs. warrantless, every call vs. some calls, metadata vs. listening in). Later polls would get progressively more accurate as this stuff became better known. But now that the PRISM program has also been revealed, it’s likely that future polls will be forced to use mushy wording and public opinion will be a bit more confused. Oh well.