The NSA surveillance that Glenn Greenwald revealed last night has been in place since 2006:

“As far as I know, this is the exact three-month renewal of what has been in place for the past seven years,” Sen. Dianne Feinstein (D-Calif.) told reporters Thursday. The surveillance “is lawful” and Congress has been fully briefed on the practice, she added.

Her Republican counterpart, Saxby Chambliss, concurred: “This is nothing new. This has been going on for seven years,” he said. “Every member of the United States Senate has been advised of this. To my knowledge there has not been any citizen who has registered a complaint. It 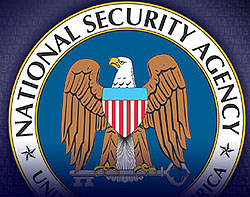 has proved meritorious because we have collected significant information on bad guys, but only on bad guys, over the years.”

Neither Feinstein nor Chambliss said this, but the obvious inference from their statements is that this program isn’t limited to Verizon. It’s almost certainly a universal dragnet that applies to every phone service provider in the country. What’s more, we’ve known since 2005 that a similar program was put in place by President Bush in 2002. Basically, then, NSA has been hoovering up all the telephone metadata in the United States for the past 11 years.

So what now? Republicans loved this program back when Bush approved it. Congress basically gave it its official blessing in 2008. President Obama thinks it’s a great idea. And congressional leaders, who have known about this for a long time, mostly seem to be fine with it. I don’t know what the public thinks, but we’ll probably find out soon. I wouldn’t be surprised if public support is up around 70 percent or higher once everyone figures out what this program really does.

It’s disheartening as hell that we’ve come to this. But the problem is that, like it or not, it probably works. House Intelligence Committee Chairman Mike Rogers (R-Mich.) certainly thinks so, telling reporters today that the surveillance program helped thwart a “significant” case of domestic terrorism “within the last few years.” That’s going to be hard to fight. The vast majority of the American public seems to think this is a fair tradeoff, and aren’t really concerned with spy agencies having access to their phone records. (If it were the contents of their calls, that would probably be a different story.)

What we really need to know is whether there’s any evidence that NSA has abused the program. I’m not even sure what “abuse” would mean in this context, since they seem to have free rein in what they do with the data, but more information on that score could—maybe—turn public opinion around. Where’s the whistleblower who will fill us in on this?