To help deter questionable lawsuits, the Obama administration plans to, among other things, direct the Patent and Trademark Office to start a rule-making process aimed 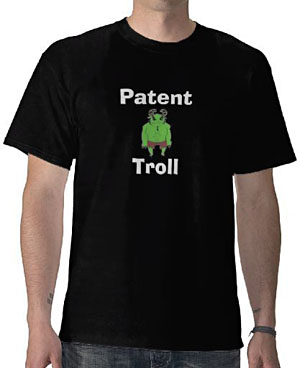 at requiring patent holders to disclose the owner of a patent, according to senior Obama administration officials. Businesses sometimes are sued by shell companies and don’t always know who actually owns the patent they are being accused of infringing, and whether the firm holds other relevant patents.

In addition, the president plans to ask Congress to pass legislation that would allow sanctions on litigants who file lawsuits deemed abusive by courts, officials said.

I suppose these might be good ideas, but I’m a little hard pressed to see how they’re going to make much of a difference. I’m with Tim Lee, who points out that a series of court rulings in the 80s and 90s made it possible for everyone, not just the trolls, to be granted patents that never would have withstood scrutiny under earlier rules:

Today, we’re suffering a collective hangover for that patenting binge: hundreds of thousands of patents that probably shouldn’t have been granted. The problem is made worse by rules that give patent holders too much bargaining power against accused infringers.

Trolls have taken advantage of these rules, but so has everyone else with a patent portfolio….The most innovative start-ups are increasingly being forced to make payments to their more established competitors, whether or not the latter continue innovating. That actually discourages innovation, the opposite of the effect the patent system is supposed to have.

….Anti-troll legislation targets one set of firms that are taking advantage of a broken patent system. But it might be more productive to focus on reforms to fix the patent system itself.

The biggest problem here is that it’s not as easy as it sounds to distinguish a patent troll from any other patent owner. But even if it were, why should we? In all sorts of areas, people are allowed to buy rights to revenue streams that they themselves aren’t responsible for producing. Why should patents be any different?

They shouldn’t be. If a patent is legitimate, then its owner should be able to exploit it. That should be true whether the owner is the original inventor, a corporation who employs the inventor, or a firm that buys the rights to the patent. What’s more, there’s no reason that an inventor with a legitimate patent shouldn’t be able to sell it off if she thinks someone else is better able to exploit it. Once you allow that, however, there’s nothing to stop someone from accumulating lots of legitimate patents and exploiting them.

But is a firm with lots of legitimate patents a patent troll? Nope. Whether we acknowledge it or not, the stuff that strikes as trollish is almost always related to firms with lots of patents that seem kind of bogus. If we want to reform our patent system, that’s where we need to start. Limit patents much more stringently than we do and, perhaps, place common sense licensing rules on them. If we do that, we’ll no longer care who owns the revenue stream.

For more, check out Zachary Roth’s 2005 piece in the Washington Monthly, “The Monopoly Factory: Want to fix the economy? Start by fixing the Patent Office.” It’s a pretty good overview of the problem.