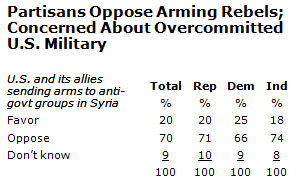 A new Pew poll tells a remarkable story: not only does the American public not want to get more involved in Syria, the American public doesn’t even want to send arms to the rebels. What’s more, this feeling is entirely bipartisan: Democrats, Republicans, and Independents all oppose arming the rebels by a margin of about 70-20. When was the last time that happened? It’s a sign of the strength of the Beltway consensus in favor of intervention that despite this, President Obama was feeling pressure from all sides to do exactly the opposite of what 70 percent of the public wants. The war gods are strong in America.