One of the arguments about Edward Snowden that I’ve occasionally gotten caught up in is: What difference has he made? Has he really told us very much we didn’t know before?

In a broad sense, you can argue that he hasn’t. We knew (or certainly suspected) that NSA was collecting enormous streams of telephone metadata. We knew they were issuing subpoenas for data from companies like Google and Microsoft. We knew that Section 702 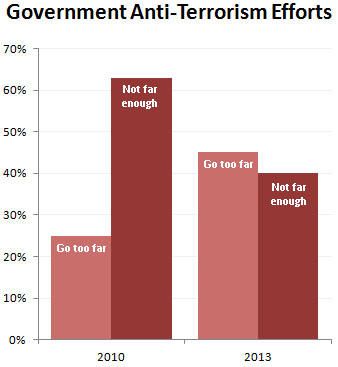 warrants were very broad. We knew that domestic data sometimes got inadvertently collected. We knew that massive amounts of foreign phone and email traffic were monitored.

As it happens, we’ve learned more than just this from the documents on Snowden’s four laptops. Still, even if you accept this argument in general terms—and I’ve made it myself—Snowden still matters. It’s one thing to know about this stuff in broad strokes. It’s quite another to have specific, documented details. That’s what Snowden has given us, and it makes a big difference in public debate. A Quinnipiac University poll released this week demonstrates this vividly. Three years ago, only 25 percent of Americans thought the government had gone too far in its anti-terrorism efforts. Policywise, nothing much has changed since then, but in 2013 that number has shot up to 45 percent.

This is how change happens. The public gets hit over the head with something, lawmakers are forced to take notice, and maybe, just maybe, Congress holds oversight hearings and decides to change the law. There’s no guarantee that will happen this time, but it might. And regardless of how “new” Edward Snowden’s revelations have been, we have him to thank for this.