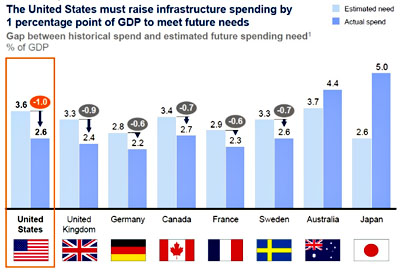 Barry Ritholtz passes along the chart on the right from the McKinsey Global Institute. It shows how much various countries spend on infrastructure compared to future demand. On the far right, Japan is spending a lot more than it needs. On the far left, the United States is spending a lot less.

McKinsey figures our shortfall at about 1 percent of GDP. That’s $160 billion. So a five-year project to build out our decaying infrastructure would cost roughly a trillion dollars. It would create jobs now; it would be ultra-cheap at current interest rates; and it would promote growth in the future.

That would be for roads, bridges, airports, rail lines, local transit, electrical grids, gas pipelines, internet backbones, water projects, and much more. A trillion dollars for infrastructure. That’s what he should be fighting for.