Yesterday, Dana Liebelson pointed out “5 Intriguing New NSA Revelations From Edward Snowden.” Read it! But I want to focus on just two of these things, which are way more than merely intriguing.

A couple of days ago, the Washington Post released four more slides from the PowerPoint deck that describes the PRISM program. One of them is on the right, and it explicitly says that PRISM provides NSA analysts with real-time notification of email 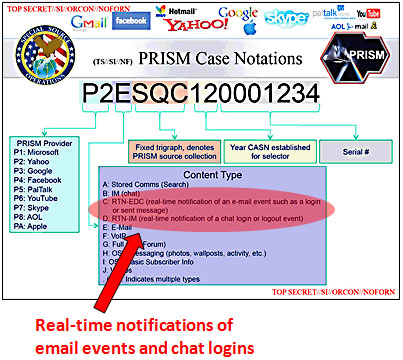 events and chat logins. The Post rather mysteriously says nothing more about this except that it “reflects the availability, confirmed by The Post’s reporting, of real-time surveillance as well as stored content.”

This is obviously important for its own sake, but also because it sheds some additional light on the contention that PRISM provides “direct access” to servers from Google, Microsoft, and others. If this stuff is truly available in real-time, then NSA really would have to have direct access. Alternatively, this slide could simply mean that PRISM retains records of events that were collected in real time by other NSA programs. But which is it?

2. All of your cellphone calls are being recorded.

This is from a speech that Glenn Greenwald gave last Friday:

Another document that I probably shouldn’t share since it’s not published but I am going to share it with you anyway—and this one’s coming soon but you’re getting a little preview—It talks about how a brand new technology enables the National Security Agency to redirect into its repositories one billion cell phone calls every single day.

….It doesn’t mean they’re listening to every call. It means they’re storing every call and have the capability to listen to them at any time and it does mean that they’re collecting millions upon million upon millions of our phone and email records.

What Greenwald is saying is that NSA doesn’t just collect records of calls, it actually records a billion cellphone calls per day. Are these domestic calls, or only international calls? If it includes domestic calls, it’s more explosive by an order of magnitude than anything else he’s reported so far. Stay tuned.