The Wall Street Journal ran the chart on the right today, showing that Apple’s iPhone is losing ground to Android. But Matt Yglesias says this isn’t bad news for Apple: after all, 13 percent of 236 million is a lot more than 17 percent of 156 million. Apple is selling more 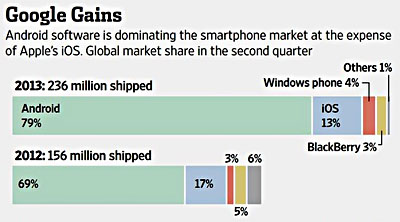 phones than ever, and making lots of money on them.

This is true. But I’d say it’s still bad news for Apple. Until now, one of Apple’s big advantages in the market has been the depth and quality of its app ecosystem. But as its market share keeps decreasing, that will go away. Developers will write apps for Android first, and then port their code over to iOS later. All the newest and coolest stuff will be available on Android phones first, and as that happens the all-important teen demo will slip away. Apple’s obsessively tight control over what you’re allowed to do with your phone will start to seem creepy, not smart, and their single-minded dedication to a single form factor will become an albatross.

Not right away, of course. It will take a while. But there’s a tipping point where declining market share turns into a death spiral. If that happens, the iPhone will become cousin to the Mac: a niche product that spins off some money but not much else. And that might be OK. Maybe Apple has never counted on the iPhone being an industry-leading product forever, and figures that the next big thing will power its next growth phase, all funded by stagnant but steady profits from the iPhone. Maybe.