“What we need in our economy is some certainty. We don’t need another self-inflicted wound,” Lew said in a “Squawk Box” interview. “Congress should come back and they should act.”

….The president is “not going to be negotiating over the debt limit,” Lew told CNBC. “Congress has already authorized funding, committed us to make expenditures. We’re now in a place where the only question is, will we pay the bills that the United States has incurred?” Answering his own question, Lew stressed there can be no question about that.

As part their budget-reduction strategy, Republicans have been trying to repeal and defund the president’s health-care law. But Lew said the White House won’t accept any delay or defunding of Obamacare.

It’s pretty obvious that Obama regrets negotiating over the debt ceiling back in 2011, thus giving Republicans an expectation that he might do it again. At the time, I think Obama was genuinely eager to pass a Grand Bargain on long-term deficit reduction and viewed the debt ceiling as a good pretext, one that would make both Democrats and Republicans more likely to come to an agreement. In the end, that failed, and this time around there’s really nothing Obama wants from Republicans. They had their chance at a serious debt-reduction deal and turned it down, and Obama obviously has no desire to waste his time with that again. Besides, with the deficit already plummeting, he doesn’t need a deal anymore and couldn’t get congressional Democrats to support one even if he did. 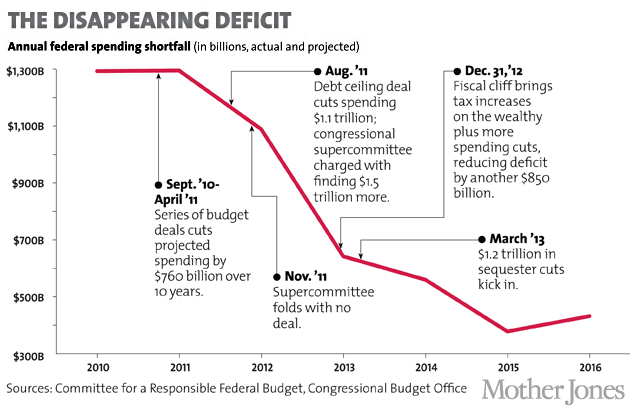 So he can stand firm pretty easily because there’s nothing much Republicans can offer him. The only leverage they have is a government shutdown, and that isn’t much of a threat. Both Obama and John Boehner know perfectly well that a shutdown would hurt Republicans more than it would hurt Democrats.

But that’s logic, and logic is selling at a deep discount these days. The fever swamp wants a debt ceiling default, and there’s a pretty good chance they’re going to force one through. Boehner just doesn’t have the clout or the influence to stop his lemmings from racing over the cliff. At this point, the most germane question probably isn’t whether Republicans are going to force a default, but how long they’ll hold out after they’ve done it. Just how badly do global markets have to panic before they finally come to their senses?

I don’t know. But as long as we’re on the subject, I’d like to add one pre-emptive note. The debt ceiling crisis is likely to renew calls for Obama to settle the whole thing unilaterally by issuing a trillion-dollar platinum coin. As you all know, my own view is that this is plainly illegal, but my view doesn’t matter. What matters is that the platinum coin option only works if the Fed is willing to accept it on deposit, and this is something they’ve already said they wouldn’t do. Like it or not, this means there is no platinum coin option. So let’s not spill too much ink on it this time around, OK?