Why has the economy recovered so sluggishly since the 2008-09 recession? Reasonable people can point to lots of reasons: debt overhang, the zero lower bound on interest rates, loss of housing wealth, and too little fiscal stimulus, among others. But if none of those actual reasons suit your political agenda, you can always just make something up. Republicans, for example, found it convenient to blame “uncertainty.” The business community was just so stonkered by the blizzard of new rules and regulations from the Obama administration that it was unwilling to invest in the future.

Never mind that business investment has actually recovered fairly nicely. Never mind that outside the financial sector (which is doing just fine, thankyouverymuch), Obama hasn’t introduced any more regulations than other recent presidents. Never mind that lack of consumer demand was more than enough to explain whatever reluctance businesses might have had to build new factories.

Never mind all that. Republicans wanted to blame the sluggish recovery on mountains of red tape from the business-hating Obama administration, and the press played along. This means that “uncertainty” got a lot of media attention, which in turn means that if you have an “uncertainty index” based partly on media mentions, it would have shown persistent elevation during 2010-12, the heyday of the uncertainty campaign. Sure enough, that’s exactly what it showed: 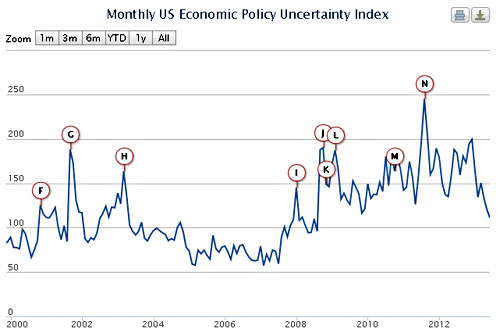 Amazingly enough, the index suggests that economic uncertainty was higher in mid-2012 than it was during mid-2008, when the entire global financial system was collapsing around our ears. And just as amazingly, it’s plummeted ever since. Today it’s only barely higher than its 2000-07 average.

On a substantive basis, the fact that uncertainty spiked during the debt ceiling crisis (labeled with an N on the chart) makes sense. The rest of the high level of uncertainty between 2010 and 2012 really doesn’t. However, if instead you read the last few years on this chart as basically measuring the strength of the Republican campaign to pretend that Obama was strangling business growth with his tsunami of rules and regulations, then it makes perfect sense. Republicans had plenty of incentive to promote that theme during campaign season, and now that it’s over they don’t. So the index goes down.

This comes via Jim Tankersley, who points out that if uncertainty really was driving the sluggish recovery, we’d expect to be seeing a hiring boom now that it’s declined. But there’s really been no sign of this. As we knew all along—and as the media should have known all along—”uncertainty” was just an invented partisan talking point. It no longer serves any purpose, so now it’s gone. But the sluggish recovery is still with us.