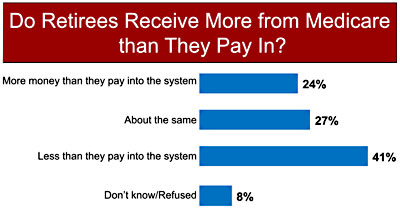 Here’s your Medicare myth of the day: It turns out that a majority of Americans believe that retirees get about as much from Medicare as they pay in during their lifetimes. Or maybe even less.

As it turns out, this is precisely the opposite of the truth. The best estimate out there suggests that a single male will pay $60,000 in Medicare taxes over his lifetime and receive $170,000 in benefits during retirement.1 That’s a 3:1 benefit ratio—and the numbers are more favorable for women and way more favorable for couples. Medicare is just about the most amazing bargain imaginable. Most of us don’t come within a country mile of actually paying for all the care we get.

It also turns out that when you ask people why Medicare costs are rising, they rate fraud and poor management at the top and new technology at the bottom. The truth, again, is just the opposite. Medicare has some fraud problems, but they’re fairly modest. It’s basically a pretty well managed program. New drugs and new treatments, however, are responsible for nearly half of the increase in Medicare costs over the past few decades. It’s the #1 cost driver by a ton. Adrianna McIntyre has the details here.

What this shows, once again, is the power of right-wing ideas in American discourse. After years of misleading the public about death panels and waste and taxes, the public pretty much believes it. Medicare isn’t welfare; we paid for it! Costs aren’t rising because we all insist on the latest and greatest treatments even if they don’t work; it’s lousy management! Welcome to conservo-land.

1Since this always comes up: yes, this is adjusted for inflation and investment returns. From the report: “The ‘lifetime value of taxes’ is based upon the value of accumulated taxes, as if those taxes were put into an account that earned a 2 percent real rate of return (that is, 2 percent plus inflation). The ‘lifetime value of benefits’ represents the amount needed in an account (also earning a 2 percent real interest rate) to pay for those benefits.”