Hale Stewart provides some reason today to be moderately bullish on the economy: the massive deleveraging that started when the recession hit has now pretty much run its course:

What started this recession was a massive build-up of debt in the system, largely related to the housing bubble. When the bubble burst, people had to sell the asset(s) underlying their debt, usually at a loss….This meant they had 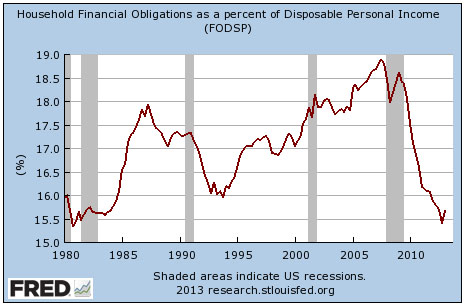 less money to spend on other items, meaning there was overall less economic demand, culminating in weak overall growth.

….Total household and non-profit debt, according to the Federal Reserve’s Flow of Funds report, has been dropping since a little bit before the recession began….Total household debt has been declining as a percentage of GDP since mid-way through the last recession….Household obligations as a percent of disposable personal income are at very low historical levels.

….Put in economic terms, the above charts show the “balance sheet” recession is close to ending.

There are still some underlying structural weaknesses in the economy that should keep anyone from getting too excited: employment is weak; wages are stagnant; automation is starting to become a real threat; deleveraging still has a ways to go overseas; and income inequality is back on the rise. Still, leverage was the core reason the 2008 recession was so severe and the subsequent recovery was so weak. The fact that household leverage is back to its historical average is good news for the future.