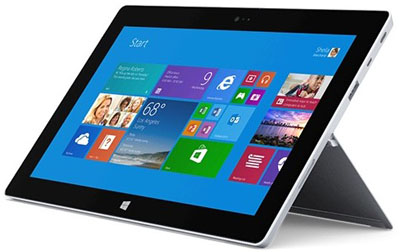 Will Oremus is outraged that Microsoft’s new, faster Surface tablets can actually be used for work-related activities:

The Surface 2 and Surface Pro 2 are jam-packed with productivity features guaranteed to make you feel guilty for using the devices for anything other than work….faster processor, faster bus, better battery life, more cores on the GPU….full Microsoft Office suite, including Outlook….tweaking the kickstand to make it easier to type away at that Excel spreadsheet while holding the tablet on your lap.

….There’s just one problem with Microsoft pitching its new tablets at people who prefer to use their tablets for work rather than play: Those people barely exist. As the Statista chart below illustrates, a Gartner survey found that tablet owners use their devices overwhelmingly for entertainment, followed by social media, e-mail, and other types of communication. Just 15 percent of tablet screen time is devoted to work. That makes sense when you consider that nearly everyone who owns a tablet also owns a different device that is far-better suited to doing work, whether desktop, laptop, or both. The tablet is where they go to get away from that work.

Let me get this straight. The fact that Microsoft’s new tablets are faster, have better battery life, and come with Office apps pre-installed is somehow a bad thing? Wouldn’t this be a good thing if any other tablet maker in the world did it? WTF?

As for tablets not being used for work, I don’t doubt that. And you know why? Because most current tablets are useless for anything other than entertainment. Take something as simple as writing a post for my blog. I can’t do it all on an iPad. Period. And I had to try five different browsers before I could find one that worked on my Android tab. And that’s just for a blog post.

Don’t get me wrong. I haven’t seen the new Surface Pro tablet—the only one that’s interesting—and it’s possible that it sucks. Maybe it’s underpowered, or overpriced, or weighs too much, or just plain doesn’t work very well. I don’t know. But you know what? I’d love to have a tablet that allowed me to work without hassle and provided me all the entertainment options I currently have. The fact that I have access to a real browser and Office apps doesn’t stop me from playing Angry Birds or reading a book on my Kindle app, after all. It just means that I can now leave home with a simple, lightweight tablet and know that I can do whatever I need to do. If that’s work, then I’ll work. If it’s not, then I’ll play.

So why the hate?