The UN report on the chemical weapons strike in the Ghouta suburb of Damascus has been released, and to no one’s surprise it confirms that a sarin gas attack was carried out. The report doesn’t try to affix blame for the attack, but the facts it provides make it vanishingly unlikely that it was launched by anyone other than the Assad regime.

The inspection team found two rockets that were relatively intact and therefore possible to describe in some detail (the details are in Appendix 5). The first one is an old Russian BM-14. The second is a unique design that Syria weapons autodidact Brown Moses has been referring to for a while as an UMLACA (Unidentified Munition Linked to Alleged Chemical Attacks). It’s shown below in the UN report: 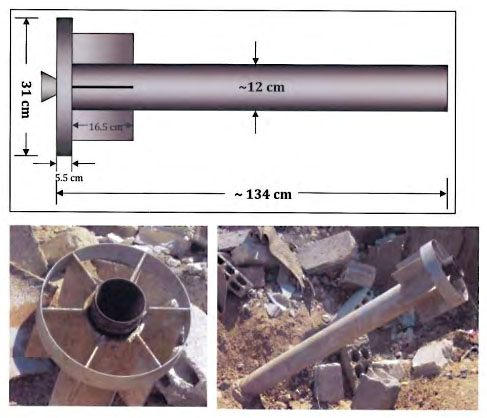 The UMLACA appears to be manufactured, not cobbled together out of parts, as you might expect if it were a rebel design. What’s more, Moses says this about the BM-14 and the UMLACA: “In the 18 months I’ve been studying the arms and munitions in the conflict I have never seen either type of munition used by the opposition.”

The UN inspectors were able to estimate the trajectories of the two rockets they found, and BruceR provides a map showing where they seem to have come from:

The graphic here shows the actual bearings the report gives (215 degrees and 105 degrees) with arrows exactly 5 miles long, pointing away from their likely points of origin….Incredibly, the two rocket paths traced backwards actually converge right on Mount Qasioun, a mountain overlooking Damascus which the Syrian government has heavily fortified. You may remember Mount Qasioun… back in May Israeli jets blew up a huge quantity of “advanced surface-to-surface rockets” on the mountain they alleged were about to be transferred by the Syrian government to Hezbollah. The same mountain is also the location of the government’s secretive Jamraya military research center, long rumoured to be central to the Syrian government’s chemical weapons program.

And the New York Times adds this:

Moreover, those weapons are fired by large, conspicuous launchers. For rebels to have carried out the attack, they would have had to organize an operation with weapons they are not known to have and of considerable scale, sophistication and secrecy — moving the launchers undetected into position in areas under strong government influence or control, keeping them in place unmolested for a sustained attack that would have generated extensive light and noise, and then successfully withdrawing them — all without being detected in any way.

BruceR’s conclusion: “The chances of this being some kind of attack by someone outside the Syrian government, already slim, basically have to drop to zero now, assuming you trust the UN’s facts as presented.” That sounds about right. Added to all the other intelligence pointing in the same direction, there’s really no longer any case to be made that this was some kind of false-flag rebel operation. It was a chemical weapons attack mounted by the Assad government. Sorry, Rush.