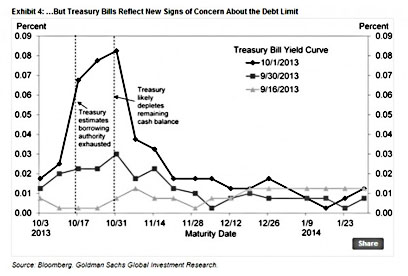 James Pethokoukis passes along the chart on the right from Goldman Sachs, which shows the yield curve on treasury bills maturing at various dates. The curve on September 16 was pretty flat. The curve on September 30 showed a bit of an uptick for bonds maturing in the second half of October. A day later, on October 1, the yield curve went nuts. Bonds maturing in the second half of October—which are at risk of delayed payment if the debt ceiling is reached—cratered in value, which means they’re now sporting big yields. If you buy a bond that matures on October 31, you can expect a return of more than 8 percent.

Treasury bonds aren’t at any risk of genuine default, so what explains this? Two things. First, there’s apparently some genuine risk that bond coupons might not get paid if we hit the debt ceiling on October 18. This has to do with the fact that the Treasury’s computer systems can’t easily prioritize payments, which means that, willy nilly, maybe some bond coupons will be missed. Among large investors, there’s also a worry that Wall Street systems can’t easily distinguish between bonds that are in technical default and those that aren’t, and this could cause bonds maturing within the danger zone to be rejected on the repo market if you try to use them as collateral. I don’t know if either of these fears is really reasonable, but that’s the chatter right now.

I’ll defer to anyone who knows more about this than me—a very large class of people, I imagine—but if I’m reading this right, market fears are taking the following form:

I’ve mentioned before my theory that the now-combined budget/debt ceiling crisis could end up being resolved only by some kind of market crash. Pleading from the business community may be falling on deaf ears at the moment, but the one thing that really does seem to get the attention of even tea party Republicans is a market catastrophe. I don’t know if we’ll get to that point, but this chart seems to suggest that if the budget/debt ceiling standoff continues for another couple of weeks, that’s what will finally put an end to it. Even John Boehner will finally tell the tea partiers that enough is enough if the repo market has seized up and U.S. treasury bonds are selling at about the same premium as those from Greece.