Via Andrew Sullivan, Connor Simpson passes along the latest results of the YouGov BrandIndex survey, which tells us which brands are the most trusted. Results for Republicans are on the right, and as you can see, Fox News has fallen so far it’s not even in the top ten anymore. Nor is this just an 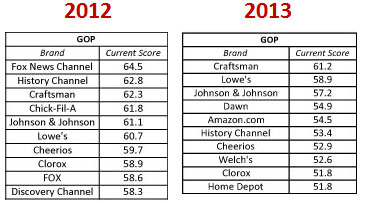 election year aberration. Fox News ranked #1 in both 2011 and 2012 before it cratered this year. Simpson takes a crack at figuring out what happened:

So where did it all go wrong? Some trace the recent Republican-Fox divorce all the way back to last November, when poor Megyn Kelly roamed through the Fox hallways looking for an answer to Karl Rove’s ridiculous question: why isn’t Mitt Romney president?

….Right after the election, Slate’s Allison Benedikt argued Republicans should stop trusting the network because of its impossibly close ties with the Republican Party if they want honest news. “After Karl Rove’s on-air freakout and the aforementioned MegynCam challenge, Fox was forced to acknowledge that Obama had won the damn election. And now what are they left with?” Benedikt asked. “A whole lot of viewers who are quite surprised to find that they are once again outnumbered by Americans who actually like better access to health care and don’t all keep Carrie Mathison-style timelines of the Benghazi cables on their living room walls.” A Public Policy Poll released in January showed a serious decline in trust during the months after the election. Only 52 percent of those who identify as “somewhat conservative,” said they trust Fox News, down from 65 percent last year.

Well, it would be nice to believe this, but I have to admit I’m having a hard time with it. You see, I haven’t noticed any particular increase in conservative dedication to the values of truth and compromise and caring about the less fortunate. Quite the contrary. Perhaps you’ve noticed the same thing?

So I’m a little flummoxed. If conservatives are even more radicalized than ever—and all the evidence suggests they are—why don’t they like Fox News as much as they used to? Maybe it’s not really trust at all. Or at least, not trust in the usual sense. Maybe after Obama’s election victory, they decided that Fox News had failed them. After all, the implicit promise of Fox News was an assurance that they were going to get rid of that Kenyan socialist in the White House, and they didn’t deliver the goods. Maybe conservatives still trust Fox News in the usual sense of believing their version of events, but they no longer trust them to be effective.

Or, who knows? Maybe conservatives are just watching less TV. The History Channel suffered a pretty big plunge too. So two TV channels got replaced by Craftsman and Lowe’s. Maybe they’re all just retreating to their workshops?

Anyway, the whole thing is pretty weird. What’s up with Welch’s? How did they break into the top ten? Are Republicans drinking more grape juice these days? And why is Chick-Fil-A no longer highly trusted? I suppose that happened after their epic cave last year, when they traded in their anti-gay message for PR mush: “We are a restaurant company focused on food, service and hospitality; our intent is to leave the policy debate over same-sex marriage to the government and political arena.” Just another bunch of losers.

Anyway, here are the full results for 2012 and 2013. Basically, liberals like Google and conservatives like Welch’s. Feel free to make sense of that as you will.