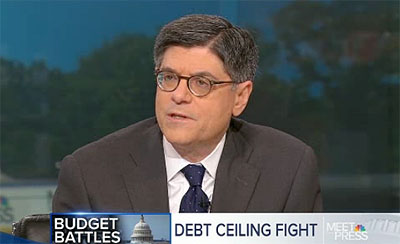 Bob Somerby writes today about Sen. Rand Paul’s appearance on Meet the Press this weekend, but throws in an aside about Treasury Secretary Jack Lew’s appearance:

[Paul] followed Jack Lew, who pretty much convinced the nation that we have little to fear from a failure to raise the debt limit. We know, we know! Lew was trying to say the opposite. But what a horrible, narcotized spokesman!

It’s true that Lew took a pretty low-key approach, despite host Savannah Guthrie’s best efforts. “Are you talking catastrophe?” she asked. Lew wouldn’t bite, so then she gave him another chance. “It would be calamitous for the economy?” Still no bite! “It would be very bad,” was the worst Lew could summon up.

That’s pretty soporific, all right. The problem, I assume, is that Lew is in an impossible situation. Breaching the debt ceiling would be pretty calamitous, but Treasury secretaries have an obligation not to panic markets with loose talk. Backbench congressmen, by contrast, can say anything they think might get them a few minutes on the evening news.

It’s an asymmetrical war, and it’s not clear what the answer is. Administration officials have a fine line to walk, trying to make sure they have well and truly warned everyone about how disastrous a debt ceiling breach would be, but at the same time not sending markets into a tailspin unnecessarily. I’m not sure what the answer is, but I think Bob is right: Lew pushed the balance a little too far into yawn inducing territory yesterday. He needs to be clearer about what exactly would happen once we finally get to the day when we can’t pay our bills.