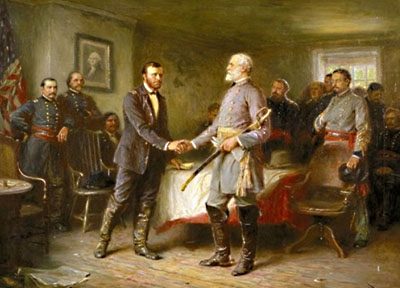 My congressman, John Campbell, has been sending out daily emails during the budget showdown, and today’s wrap-up shows an admirable grip on reality:

The mainstream media (MSM) would have you believe that this was a “bipartisan agreement”. It was…..in the same way that Lee and Grant reached an agreement at the Appomattox Courthouse in 1865. It was a complete surrender on the part of Republicans. All that was “negotiated” were the terms of that surrender.

Yeah, pretty much. Except that, as I recall, Grant allowed Lee’s men to keep their swords and horses, didn’t he? I’m not sure the 2013 GOP even managed to get that much out of the deal.

In any case, Campbell’s email is basically an effort to buck up the spirits of his fellow conservatives by taking shots at the media, Janet Yellen, Obamacare, and scurrilous Democrats. (No, I’m not sure what Yellen did to deserve being put into this company.) That’s all fine. But I thought this was the interesting part:

The next “cliff” comes on January 15, 2014 when the government could potentially shut down again. That date was intentionally chosen because that is when the next round of Sequester cuts, that further reduce government spending, take effect. This round of cuts will disproportionately hit defense spending. Democrats are hoping that they can leverage increased funding for defense for all the IRS, EPA, ObamaCare and welfare spending that they want. I think that effort will fail. The greatest threats to America today are from within, not without. In my opinion, we must preserve the Sequester as the only force we currently have that is limiting the cost and scope of government to some degree. Between now and then, watch the White House spin machine spool up on how “devastating” these cuts are in order to soften the ground for this push. But, if they want to shut the government down again in order to increase spending, let them do it.

How should this be taken? In its most obvious sense, it’s an assertion that Republicans won’t budge on sequester levels of spending. If the greatest threats to America are “from within, not without,” this means they’re willing to sacrifice the Pentagon in order to keep domestic spending low.

On the other hand—and I freely admit that I’m just reading tea leaves here—when Campbell says only that “I think” increased funding will fail, that sure doesn’t sound very adamant, does it? Even granted that Campbell isn’t a table-pounding type of tea partier, that seems pretty lukewarm. Maybe there really is a minor deal to be made on the budget later this year.