Is life expectancy a good measure of the quality of a country’s health care system? I’ve always been pretty hesitant to use it as a primary metric because….well, I’ll just let Aaron Carroll describe people like me:

One of my issues with the arguments people muster against life expectancy is that they are all so small. They attack some individual behavior or factor that might affect life expectancy in some minimal way, but nowhere near enough to cause the big differences we see. It’s smoking. It’s drinking. It’s accidents. It’s immigrants. It’s chemicals in the water. It’s stupidity. It’s suicide. It’s freedom.

OK, OK, maybe I should take life expectancy more seriously as a metric of health care quality. It’s certainly true that American life expectancy, which largely tracked other rich countries in the years after World War II, diverged rather dramatically starting around 1990. Why? It’s true that there could be a thousand different reasons related to culture and food and violence and so forth, but most of those things existed all along. So what happened around 1990?

One plausible answer is that it’s related to divergences in health care starting around then. That’s a tricky thing to prove, however, unless you dig deeply into the details. Recently a team of authors did just that in JAMA and produced the chart below. It shows Years of Potential Life Lost (YPLL) as multiples of the median for other rich countries. A number greater than one means we’re losing more years than the rest of our peers. Here’s the chart: 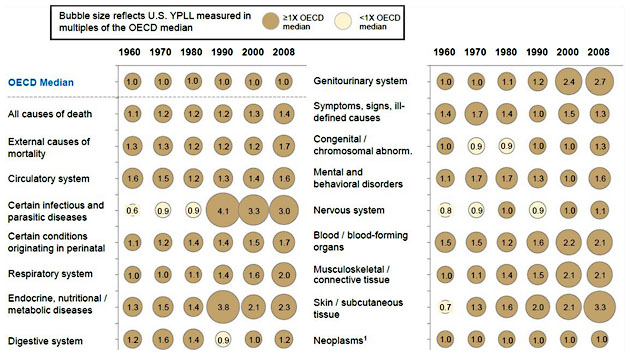 The dramatic thing about this chart is that the United States does worse than other rich countries in every single area. Sure, it’s possible that there are 16 different reasons that we’re doing worse in 16 different categories, but it doesn’t seem likely, does it? When something is this widespread, the cause is a lot more likely to be something broadly based, like health care delivery. This isn’t smoking gun proof that our Rube Goldberg health care system is responsible for our lousy life expectancy, but it sure ought to make you sit up and take notice. There’s a pretty good chance that you, your friends, and your family are going to live three or four years less than you should, solely because you live in America.