Kaiser has released its monthly tracking poll on Obamacare, and there’s really no way to put lip gloss on this pig. Public perception of the law has been worsening for the past nine months, and it gapped out sharply after the rollout debacle in October. There’s now a 16-point delta 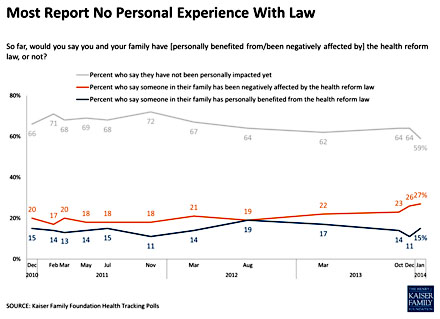 between unfavorable and favorable views of the law, 50-34 percent. With the exception of one or two monthly anomalies that are probably polling artifacts, this is by far the worst it’s been since the law was passed.

You can see the effect this has in the chart on the right: 27 percent now say that Obamacare has “negatively affected” someone in their family. That’s crazy. Even if you subtract the baseline of 18-19 percent who have been saying this all along, that’s an increase of nearly ten points over the course of 2013. Unless you take an absurdly expansive view of “affected,” this is all but impossible. Obamacare simply doesn’t have that kind of reach.

But we’ve been though a recent period in which every co-pay increase, every premium increase, and every narrowing of benefits has been blamed on Obamacare. These things have happened every year like clockwork for the past couple of decades, but this year it was convenient to blame them on Obamacare. Combine that with the PR disaster from the website rollout, and a whole lot of people now believe that Obamacare is hurting them.

Unfortunately, this is fertile ground for Republicans. If they really have the discipline to avoid shooting themselves in the foot this year over idiotic confrontations with the president, running their midterm campaign solely on opposition to Obamacare might be a winner.