With spring training in the air here in Los Angeles, the saga of Dodger baseball is entering the ninth inning. Until last year, Dodger games were split between a broadcast channel and a basic 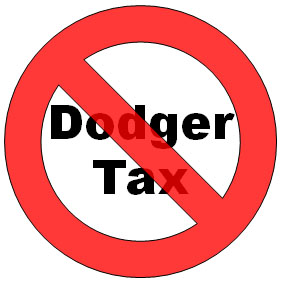 cable sports channel. Total cost for the rights was about $50 million. Then Time-Warner signed a deal to run a 24/7 Dodger channel and paid a whopping $210 million for the 2014 rights. They have to make back that money, of course, and their plan for doing it is twofold: (a) charge a lot for the channel, and (b) insist that cable and satellite companies put it in their basic subscriber packages, where everyone has to pay for it:

Many distributors are upset about being pressured to carry a new sports network in a region that already has several similar channels, including not only Prime Ticket but also Fox Sports West, Pac-12 Los Angeles and Time Warner Cable’s SportsNet and Deportes.

“It is really hard to understand why everyone needs their own channel when they didn’t need one before,” said Andy Albert, senior vice president of content acquisition for Cox Communications.

“Time Warner Cable has unilaterally decided to pay an unprecedented high price and now wants all of their own customers as well as those of their competitors, none of which who had any say in the matter, to pick up that tab,” said Dan York, DirecTV’s chief content officer….”Given the high price that Time Warner Cable is seeking, it would be reasonable to ask that only those families who truly want to pay for the Dodgers actually pay for it,” said DirecTV’s York, whose company has 1.2 million subscribers in the region.

SportsNet LA’s response: A la carte is “not really on the table,” Rone said.

Of course it’s not. If it were a la carte, Time-Warner wouldn’t have a snowball’s chance of earning back its $210 million. But I say: tough luck. It’s time to put a stop to this madness. The Dodgers (and the Lakers, who signed a similar deal) seem to think that every cable household in the LA basin should pay a head tax of $60 per year to support them. Why? Beats me. Because it’s sports. No other private enterprise is able to demand an explicit tribute like this from every consumer in a region, whether or not they happen to buy their products. For most companies, the best they can do is finagle a few tax breaks here and there—which, of course, sports teams do too.

This is basically a tax on everyone with a TV. There’s no excuse for it, and our local tea partiers should all be up in arms about it. Here’s hoping that Cox and DirecTV and all the other cable companies hold out and force the Dodgers and Time-Warner to cry uncle. Someone needs to set an example.