Roger Clegg is seriously unhappy about Eric Holder’s call for the restoration of voting rights to felons who have served their sentences:

He conveniently ignores the reason for felon disenfranchisement, namely that if you aren’t willing to follow the law, then you can hardly claim a role in making the law for everyone else, which is what you do when you vote….The right to vote can be restored, but it should be done carefully, on a case-by-case basis, once a person has shown that he or she has really turned over a new leaf. The high recidivism rates that Mr. Holder acknowledges in his speech just show why that new leaf cannot be presumed simply because someone has walked out of prison; he’ll probably be walking back in, alas. A better approach to the re-integration that Mr. Holder wants is to wait some period of time, review the felon’s record and, if he has shown he is now a positive part of his community, then have a formal ceremony — rather like a naturalization ceremony — in which his rights are restored.

Let’s concede the obvious up front: Released felons are more likely to vote for Democrats than Republicans, so there’s an obvious partisan motivation on both sides of this debate. 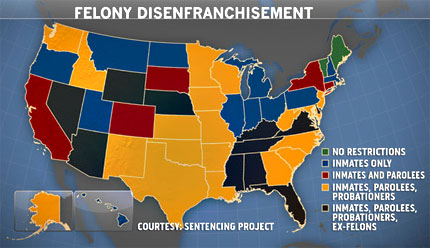 there’s some specific reason you don’t qualify. And those reasons should be very clear and spelled out via statute.

My position here is based on a simple—perhaps simplistic—view of political freedom. I believe that liberal democracies require three minimum rules of law: free speech, the right to a fair trial, and universal suffrage. At the risk of stating the obvious, this doesn’t mean that nothing else is important.2 But I do mean that if you have these three things, then the odds are very strong that you qualify as a free country. Countries that enforce these rights differ considerably on a wide variety of other metrics and still strike us as mostly free. But I can’t think of a country that fails on any of them that we’d consider mostly free.

In other words, I believe the right to vote is on the same level as free speech and fair trials. And no one suggests that released felons should be denied either of those. In fact, they can’t be, because those rights are enshrined in the Constitution. Voting would be on that list too if it weren’t for an accident of history: namely that we adopted democracy a long time ago, when the mere fact of voting at all was a revolutionary idea, let alone the idea of letting everyone vote. But that accident doesn’t make the right to vote any less important.

A probationary period of some kind is probably reasonable. But once you’re released from prison and you’ve finished your parole, you’re assumed to have paid your debt to society. That means you’re innocent until proven guilty, and competent to protect your political interests in the voting booth unless proven otherwise. No free society should assume anything different.3

1What’s reasonable? Let’s just leave that for another day, OK?

2No, really, I mean that. There’s other important stuff. Honest. But these are the big three. Even freedom of religion can vary a lot within liberal democracies, with a minimum floor set by the fact that most religious expression is protected as free speech. Other important rights—including property rights—can largely be protected as long as majorities can freely express their views and freely elect representatives who agree with them.

3This is doubly true in a country like ours, where incarceration is so rampant and so racially unbalanced.