Robert Gordon is one of our preeminent scholars of economic growth. He’s also a well-known pessimist about the future: he believes that well-known trends in demographics, education, inequality, and government debt will suppress growth rates over the next several decades.

Fair enough. But what about the possibility that advances in robotics and artificial intelligence will have a huge impact between now and 2050? In a new paper, Gordon dismisses 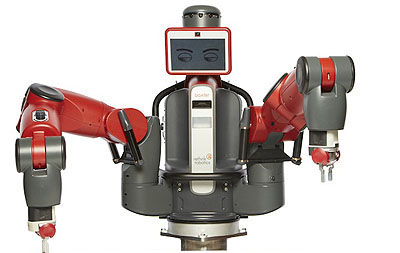 the idea in a few disdainful paragraphs. Here’s an excerpt:

Much attention has been paid in the popular media to small robots since “Baxter,” the inexpensive $25,000 robot, made his debut on the TV program 60 Minutes….Reflections on Baxter lead to skepticism that it/he is a major threat to American jobs outside of routine tasks in manufacturing, which only makes up 8 percent of American employment.  For his demonstration at the TED conference in Long Beach in late February, 2013,  Baxter had to be packed in a suitcase.  He could not get his own boarding pass and walk onto the plane.  This is the problem with robots — they are both mentally and physically limited to narrow tasks.  They can think but can’t walk, or they can walk but can’t think.

….This lack of multitasking ability is dismissed by the robot enthusiasts — just wait, it is coming.  Soon our robots will not only be able to win at Jeopardy but also will be able to check in your bags at the sky cap station at the airport, thus displacing the skycaps.  But the physical tasks that humans can do are unlikely to be replaced in the next several decades by robots.

….What is often forgotten is that we are well into the computer age, and every Home Depot, Wal-Mart, and local supermarket has self-check-out lines that allow you to check out your groceries or paint cans by scanning them through a robot.  But except for very small orders it takes longer, and so people still voluntarily wait in line for a human instead of taking the option of the no-wait self-checkout-lane.  The same theme — that the most obvious uses of robots and computers have already happened — pervades commerce.  Airport baggage sorting belts are mechanized, as is most of the process of checking in for a flight.

I promise that this is a fair excerpt (and of course you can decide for yourself by clicking on the link). Gordon’s entire argument is that computers were invented a long time ago and we still don’t have smart robots today. And if we don’t have them by now, we won’t have them anytime soon.

This is an embarrassingly bad argument. I can somehow imagine a circa-1870 version of Gordon arguing that all this folderol about electricity is ridiculous. Why, we’ve been studying electricity for over a century, and what do we have to show for it? Some clunky batteries, the telegraph, a few arc lamps with limited use, and a steady supply of techno-optimist inventors who keep telling us that any day now they’ll invent a practical generator that will replace steam engines and change the world. Don’t believe it, folks.1

It’s funny. Every time I write about AI, I get email from some friends and regular readers telling me that I’m all wet. And these correspondents have good arguments. I don’t happen to think they’re right, but they’re good arguments from people who have obviously thought about this stuff. Gordon, however, doesn’t even pretend to engage with the AI literature. He just says that since the current level of AI is primitive, it’s obviously all a bunch of bunk.

But if that’s all you’re going to say, why even bother? A little over a year ago Gordon wrote an op-ed in which he dismissed the prospects of several evolving technologies, but didn’t even mention AI. At the time, I wrote that this was a blinkered view: “At the very least, you need to acknowledge it, and then explain why you think it will never happen, or why it won’t produce a lot of future growth even if it does.” This time around, Gordon hasn’t ignored AI completely, but he certainly hasn’t taken it remotely seriously.2 This is, to be frank, not the work of a scholar who seriously wants to engage with the prospects of future technological growth. It’s the work of someone who’s just checking off a box in order to fend off critics of his pre-ordained conclusion.

1Ironically, Gordon writes that in the mid-1870s everyone knew what was coming: “Inventors were feverishly working on turning the telegraph into the telephone, trying to find a way to transform electricity coming from batteries into the power source to create electric light, trying to find a way of harnessing the power of petroleum to create a lightweight and powerful internal combustion engine. The 1875 diaries of Edison, Bell, and Benz are full of such ‘we’re almost there’ speculation. Once that was achieved, the dream since Icarus of human flight became a matter of time and experimentation.” But for some reason, similar feverish work on intelligent machines in the 2010s is treated as obviously going nowhere.

2This would actually be fine if he’d just say so. AI is speculative enough that it would be perfectly reasonable to simply treat it as a wild card: write a paragraph acknowledging that, yes, it could upend everything, but that this particular paper is a look into a future in which AI remains immature for the foreseeable future. Nothing wrong with that.