Last year Gallup reported that the number of uninsured had dropped during the final quarter of 2013. That was good news, but might have been a statistical fluke. Today, via Greg Sargent, Gallup reports that the ranks of the uninsured have now dropped substantially for two quarters in a row: 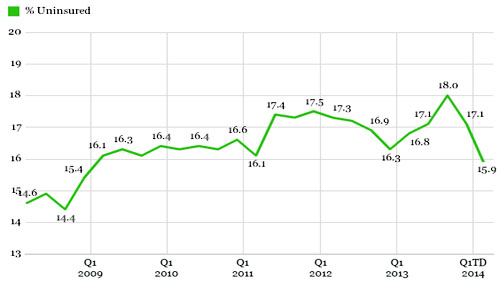 The CBO estimates that the number of uninsured will drop by 4-5 percentage points in 2014 thanks to Obamacare. If you use 2011-12 as an approximate baseline, Gallup reports a drop of about 1.5 percentage points through February. These numbers probably aren’t precisely comparable, but they represent a ballpark—and it doesn’t look like a statistical fluke anymore. We’re making progress.