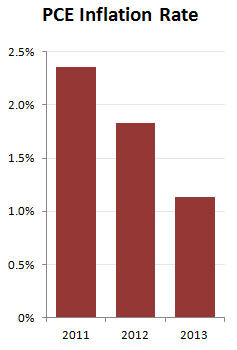 That’s the question Ryan Avent asks today. The reason is simple: In 2012, the Fed announced an inflation target of 2 percent per year, as measured by the PCE index. But they haven’t come close to hitting it. Why not?

The chart on the right shows the most recent inflation data. In 2011, PCE inflation measured 2.4 percent. In 2012, it came in at 1.8 percent. That’s a little low—especially during a supposed economic recovery—but it’s easy to see why no one was alarmed. It’s something to keep an eye on, but no one ever said the Fed could fine tune inflation to a few tenths of a point.

But then came 2013. There was a fair amount of monthly variability in the data, but the year-end number clocked in at 1.1 percent. That’s way too low, especially considering that (a) the previous year had come in below target, (b) inflationary expectations were still well anchored, and (c) the labor market was still noticeably loose. What this means is that the Fed has failed to meet its employment mandate for six full years and is now failing to meet its inflation target too. Avent wants to know what’s going on:

This is an extraordinary period of time during which the Fed has failed to meet even the rather lax definition of the mandate it has set for itself by a rather substantial margin. How can we explain this? Some possibilities are:

1) The Fed is technically unable to meet its mandate.

2) The Fed is staffed by incompetents.

3) The Fed is actually pursuing a goal outside its mandate without explaining what that goal is and what the justification is for pursuing it.

4) America’s statistics are all wrong. The Fed knows this but has refused to tell anyone else.

Whichever of the above you favour as an explanation, it suggests a need for meaningful reform, either to the personnel at the Fed or to the distribution of macroeconomic responsibilities across government.

My own guess is a little bit of #1 and a lot of #3. I suspect the Fed really is having technical trouble meeting its goals—at least, in a way it’s comfortable with. But that’s just a guess.

It’s less of a guess that the Fed is pursuing goals outside its mandate. It’s hardly a secret that there are plenty of Fed governors who are still living in the 70s, petrified of inflationary spirals and determined to keep inflation as low as possible. Not 2 percent. As low as possible. What’s more, they consider full employment not a virtue, but a threat. It leads to higher inflation, after all.

I think 2014 is something of a watershed year for the Fed. The hawks can argue that a single year of 1 percent inflation is nothing to worry too much about. This stuff bounces around. But at the very least, they should be on board with getting the inflation rate back up to their stated goal. Given the current employment level and the state of the global economy, this poses little risk. If they aren’t willing to do it, they need to come clean that they don’t really care about their statutory mandates and are simply substituting their own timeworn fears and class loyalties for the expressed will of Congress.