Felix Salmon reviews Michael Lewis’s Flash Boys today, and he’s not impressed. I think Salmon’s basic criticism is on point: the big problem with high-frequency trading isn’t that small investors get ripped off, it’s that the system is so complex that literally no one really understands how it works or what kind of danger it poses:

By far the biggest risk posed by the HFT industry, for instance, is the risk of the kind of event we saw during the flash crash, only much, much worse. The stock market is an insanely complex system, which can fail in unpredictable and 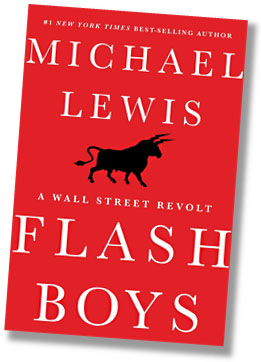 catastrophic ways; the HFT industry only serves to make it much more brittle and perilous than it already was. But in Lewis’ book-length treatment of HFT, he barely mentions this risk: I found just one en passant mention of “the instability introduced into the system when its primary goal is no longer stability but speed,” on Page 265, but no elaboration of that idea.

HFT cheerleaders like to brag that their algorithms increase liquidity. And that’s probably true. The problem is that HFTs don’t guarantee liquidity. In fact, it’s far worse than that: they displace other sources of liquidity during normal times, but there’s a good chance that during a crisis, at precisely the moment when liquidity is most important, HFT traders could suddenly and systematically exit the market because events have outrun the parameters of their algorithms. This could easily spiral out of control, turning a bad situation into a catastrophe.

Is this a real threat? Nobody knows. And that’s the problem. HFT is so complex that literally no one knows how it works or how it will react in a crisis. This is not a recipe for financial stability.

Unfortunately, that doesn’t make for a very entertaining book, so Lewis instead focuses on the ability of HFT shops to “front run” orders in the stock market—that is, to see bids a few milliseconds before anyone else simply by virtue of having computers that are physically closer to a stock exchange than their competitors. An HFT algorithm can then execute its own order already knowing the direction the price of the stock is likely to go. But even though this isn’t the biggest problem with HFT, I do think Salmon is a little too dismissive of it. Here he is on the subject of Rich Gates, a mutual fund manager who discovered he was being front run:

Gates “devised a test,” writes Lewis, to see whether he was “getting ripped off by some unseen predator.”….Gates “was dutifully shocked” when he discovered the results of his test: He ended up buying the stock at $100.05, selling it at $100.01, and losing 4 cents per share. “This,” he thought, “obviously is not right.”

Lewis does have a point here: It’s not right….In Gates’ mind, what he saw was the 35,000 customers of his mutual fund being “exposed to predation” in the stock market. Between them, those customers had lost $40: 4 cents per share, times 1,000 shares. Which means they had lost roughly a tenth of a cent apiece, buying and selling $100,000 of Chipotle Mexican Grill within the space of a few seconds.

But there’s always going to be a nonzero “round-trip cost” to buying $100,000 of a stock and then selling it a few seconds later….But still, $40 for two $100,000 trades is hardly a rip-off. Especially when you consider the money that Gates himself is charging his 35,000 mom-and-pop customers.

When Gates was running his experiments, his flagship fund, the TFS Market Neutral Fund, had an expense ratio of 2.41 percent: For every, say, $100,000 you had invested in the fund, you would pay Gates and his colleagues a fee of $2,410 per year. That helps puts the tenth of a cent you might lose on Gates’ Chipotle test into a certain amount of perspective. TFS trades frequently, but even so, any profits that HFT algos might be making off its trades are surely a tiny fraction of the fees that TFS charges its own investors. 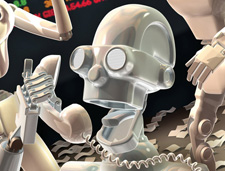 MORE: Is High-Speed Trading the Next Wall Street Disaster?

That’s true. But the whole point of HFT has always been to skim tiny percentages from a large number of trades. Nobody has ever suggested that individual traders are losing huge amounts of money to HFT shops. Nevertheless, that’s no reason to downplay it. In fact, that’s one of the things that makes HFT so insidious: it’s yet another way for Wall Street players to game the system in a way that’s so subtle it’s hardly noticeable. This is the kind of thing that permeates Wall Street, and I think Lewis is correct to aim a spotlight at it.

There are plenty of reasons to be very, very wary of HFT. I wish Lewis had at least spent a few pages on the potential instability issues, but let’s face facts. Front running is a perfectly legitimate problem to focus on, and it’s likely to generate a lot more public outrage than a dense abstract about the possibility of robots causing a financial crash sometime in the dim future. So if you’re the rare person who can attract a lot of attention to a legitimate financial danger, it makes sense to write a book that concentrates its fire on the most accessible aspect of that danger. That’s what Lewis chose to do, and I don’t really have a problem with that.