Although the economy has shown signs of life lately, growth is still pretty sluggish. The primary culprit appears to be housing: as Neil Irwin points out today, even after recovering from its Great Recession nadir, investment in residential property remains anemic compared to its average level over the past few decades. People just aren’t buying new houses—or refinancing old ones—fast enough to power a serious recovery.

The proximate cause for this is twofold. First, median incomes have been pretty sluggish: household income today is only about 2 percent higher than it was before the start of the recession. That’s just not enough income growth to get young couples confident enough to move out from their parents’ basement and strike out on their own. 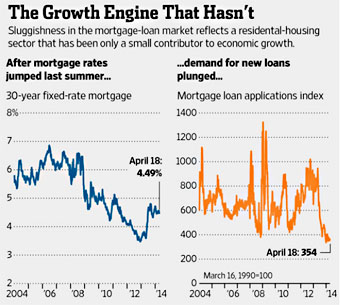 Second, as the Wall Street Journal reports, rising interest rates have killed off the refi market:

Mortgage lending declined to the lowest level in 14 years in the first quarter as homeowners pulled back sharply from refinancing and house hunters showed little appetite for new loans, the latest sign of how rising interest rates have dented the housing recovery.

….The decline in mortgage lending last quarter stemmed almost entirely from the slide in refinancing. Loans for home purchases were basically flat from a year earlier and down from the fourth quarter.

Mortgage loans were basically flat, which is bad enough. But refinancing is important too, since it puts money in people’s pockets, which they can use to either pay down debt or spend on consumer goods. Either one is good for an overleveraged economy. But now that’s coming to an end.

Housing is the single most important driver of economic growth. In the past, pent-up demand for new housing following a recession would eventually overwhelm financial trepidation, causing young families to start buying new houses. This time that hasn’t happened, and sluggish median incomes are almost certainly to blame (along with high debt levels among college grads, who are one of the prime markets for starter homes). The virtuous circle of rising incomes leading to new home buying—which in turn stimulates the economy and raises wages further—simply hasn’t happened. We are learning the hard way that there’s a stiff price to be paid when virtually all of the economic gains of a recovery go to the well off. Life may be good for them, but without broadly shared prosperity, the larger economy is stuck in a rut.