The latest, from the New York Times, describes how law enforcement officials around the country went on high alert when the Occupy protests began in 2011, passing information between agencies with an urgency suggesting that at least some people thought that people gathering to oppose Wall Street were about to try to overthrow the U.S. government. And we remember how many of those protests ended, with police moving in with force.

….If you can’t recall any Tea Party protests in 2009 and 2010 being broken up by baton-wielding, pepper-spraying cops in riot gear, that’s because it didn’t happen. Just like the anti-war protesters of the Bush years, the Tea Partiers were unhappy with the 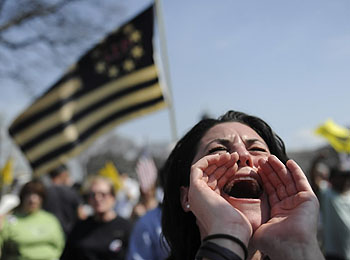 government, and saying so loudly. But for some reason, law enforcement didn’t view them as a threat.

Maybe this is because lefties don’t complain enough. You may remember the hissy fit thrown by Fox News when the Department of Homeland Security issued a report suggesting that the election of a black president might spur recruitment among right-wing extremist groups and “even result in confrontations between such groups and government authorities similar to those in the past.” As it turns out, that was a good call. But the specter of jack-booted Obama thugs smashing down the doors of earnest, heartland Republicans dominated the news cycle long enough for DHS to repudiate the report under pressure and eventually dissolve the team that had produced it.

And the similar report about left-wing extremism that DHS had produced a few months earlier? You don’t remember that? I don’t suppose you would. That’s because it was barely noticed, let alone an object of complaint. And even if lefties had complained, I doubt that anyone would have taken it seriously. There’s just no equivalent of Fox News on the left when it comes to turning partisan grievances into mainstream news.

There’s probably more to it, though. Mainstream lefties just don’t identify with the far left as a key part of their tribe. They’ll get a certain amount of support, sure, but they’ll also get plenty of mockery and derision, as the Occupy protesters did. On the right, though, extremists are all members of the tribe in good standing as long as they stop short of, say, murdering people. They only have to stop barely short, though. Waving guns around and threatening to kill people is A-OK, as Cliven Bundy and his merry band of armed tax resistors showed.

So when DHS produces a report suggesting that right-wing extremism might turn out to be a growth industry in the Obama era, the ranks of the conservative movement close. An attack on one is an attack on all, and Fox News stands ready and willing to turn the outrage meter to 11. Rinse and repeat.