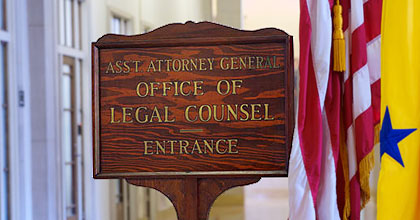 Under pressure from liberals and libertarians that threatens to sink a judicial nomination, the Obama Administration is moving closer to releasing a classified legal justification for the use of drone strikes against Americans fighting for al-Qaeda, Administration officials tell TIME.

….The U.S. intelligence community and the Office of the Director of National Intelligence want the Administration not to release the memo. Also against release is the Office of Legal Counsel, which serves as the in-house legal expert on executive branch powers and which vigorously guards its opinions.

If there is a convincing rebuttal to that argument, I haven’t heard it. Indeed, one person who may agree with it is President Obama, given that in his big national security speech last May, he said he’d tasked his administration to “extend oversight of lethal actions outside of war zones that go beyond our reporting to Congress.” What is the rationale for keeping the legal justification secret?

I’d go further. I’ve never really understood the rationale for any OLC opinions to stay confidential. In some sense, yes, there’s a case to be made for executive privilege: this is advice from one of the president’s aides to the president himself, and courts have ruled that presidents have a legitimate interest in keeping internal advice confidential in order to ensure that they get candid judgments. But that’s a helluva stretch in this case because OLC opinions go beyond mere advice. For all practical purposes, they have the force of law, since presidents use OLC opinions as the basis for determining what they can and can’t do.

Should the United States have secret laws? As it happens, the United States does have secret laws. That is, actual congressional statutes that you and I aren’t allowed to read. So this isn’t quite as unprecedented as it seems. Still, that’s a rare occurrence, while OLC opinions are routinely kept secret. Why? If specific bits and pieces need to be redacted, fine. But in a democracy, the legal reasoning justifying the enforcement of our laws should be a matter of public record. We should all know what the laws of the land are and how the executive branch is allowed to act on them. There’s really no compelling argument on the other side.