As part of the deal to fund new VA facilities in underserved areas, Democrats agreed to a Republican proposal that would allow veterans to seek private health care if they live more than 40 miles from a VA facility or if they have been waiting more than 30 days for an appointment. Here’s what the CBO has to say about that:

Maybe this is a good thing. Better access to health care means more people will sign up for health care, and they’ll do it via private providers. That’s the basic idea behind Obamacare, after all. Of course, it’s also possible that this might be a bad thing. As Phil Longman points out, outsourced care lacks the very thing that makes VA care so effective: “an integrated, evidence-based, health care delivery system platform that is aligned with the interests of its patients.”

Because the VA truly is a system, it can coordinate among all the different specialists and other health care providers who are necessarily involved in patient care these days. And because it operates as a system, the VA can also make sure that all these medical professionals are working from a common electronic medical record and adhering to established, evidence-based protocols of care—not inadvertently ordering up dangerous combinations of drugs, or performing unnecessary surgeries and tests just to make a buck.

So which is it? Beats me. That’s why I sure hope someone is authorizing some money to study this from the start. It’s a great opportunity to compare public and private health care on metrics of both quality and cost. It’s not a perfect RCT, but it’s fairly close, since the people who qualify for private care are a fairly random subsegment of the entire VA population. If we study their outcomes over the next few years, we could learn a lot.

And that’s important, because this isn’t cheap. As CRFB points out, if this policy is extended beyond its initial pilot period it will cost more than we saved from the entire defense sequester and more than Medicare Part D. This is an opportunity that shouldn’t be passed up. 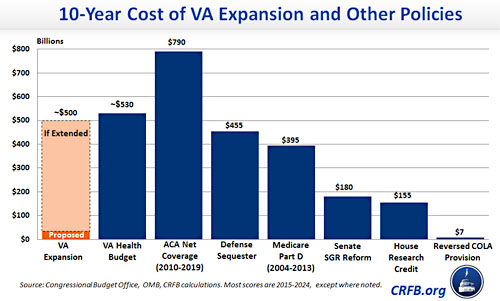