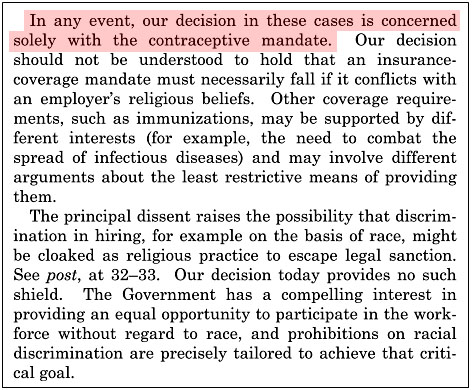 Kinda reminds you of Bush v. Gore, doesn’t it? Alito takes pains to make it clear that his opinion shouldn’t be considered precedent for anything except the narrowly specific issue at hand: whether contraceptives that some people consider abortifacients can be excluded from health plans.

I think it’s important to recognize what Alito is saying here. Basically, he’s making the case that abortion is unique as a religious issue. If you object to anything else on a religious basis, you’re probably out of luck. But if you object to abortion on religious grounds, you will be given every possible consideration. Even if your objection is only related to abortion in the most tenuous imaginable way—as it is here, where IUDs are considered to be abortifacients for highly idiosyncratic doctrinal reasons—it will be treated with the utmost deference.