A new paper concludes that “rate shock” under Obamacare has been generally more modest than we thought:

Using data from the Current Population Survey, we find that the average prices increased by 14 to 28 percent, with similar changes in California and the federal exchange states; we attribute the increase primarily to higher premiums in exchanges associated with insurer expectations of a higher risk population being enrolled.

This doesn’t take into account federal subsidies, which would lower this number even further. What’s more, rates most likely would have gone up about 10 percent even if Obamacare had never existed. Taken together, this suggests that the average premium increase thanks to Obamacare has been very 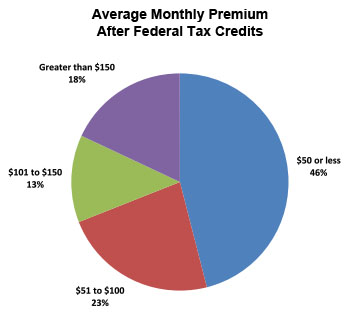 small. And of course, that small increase buys you a policy that in most cases is considerably more robust than older policies.

In related news, HHS reports that people who qualify for tax credits are paying an average of $82 per month for their policies. This is roughly a fourth of what they’d pay without subsidies. The chart on the right shows how this breaks down: more than two-thirds of those who qualify for subsidies are paying less than $100 per month. Fewer than 20 percent are paying more than $150. In a nutshell, then, we now know that (a) the system works, (b) enrollment targets were largely met, and (c) health insurance under Obamacare is pretty affordable. Matt Yglesias explains what this means:

….[Obamacare] is a large-scale effort to improve living standards for people in the bottom half of the income distribution by giving them additional economic resources. One of America’s political parties doesn’t like that idea in any non-health context and they don’t like it for health care either. They think the money it costs to provide those subsidies should be taken away, and it should be given to high-income households in the form of tax cuts.

This is an excellent and important policy debate to have. One of the great ideological issues not just of our time and place, but of democratic politics across eras and countries. Should economic resources be distributed more equally or less equally?

Yep. It’s time to stop arguing over minutiae. Fundamentally, Obamacare “works.” It’s not perfect, but after nine months we can now say that it does indeed provide health coverage to the poor and the working-class in a reasonably efficient manner, and it does this largely by a combination of taxing and/or reducing payments to the relatively well off.

I think this is a good idea. Republicans don’t. But this, rather than the cacophony of nonsense we’ve been subjected to over the past several years, is what we should be arguing about.