Oil expert James Hamilton has an interesting summary of the current world oil market up today, and it’s worth a read. His bottom line, however, is that $100-per-barrel oil is here to stay:

The run-up of oil prices over the last decade resulted from strong growth of demand from emerging economies confronting limited physical potential to increase production from conventional sources. Certainly a change in those fundamentals could shift the equation dramatically. If China were to face a financial crisis, or if peace and stability were suddenly to break out in the Middle East and North Africa, a sharp drop in oil prices would be expected. But even if such events were to occur, the 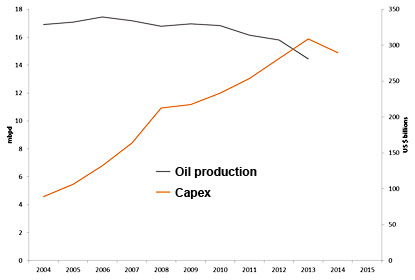 emerging economies would surely subsequently resume their growth, in which case any gains in production from Libya or Iraq would only buy a few more years.

The chart on the right shows the situation dramatically. In just the past ten years, capital spending by major oil companies on exploration and extraction has tripled. And the result? Those same companies are producing less oil than they were in 2004. There’s still new oil out there, but it’s increasingly both expensive to get and expensive to refine.

(And all the hype to the contrary, the fracking revolution hasn’t changed that. There’s oil in those formations in Texas and North Dakota, but the wells only produce for a few years each and production costs are sky high compared to conventional oil.)

In a hypertechnical sense, the peak oil optimists were right: New technology has been able to keep global oil production growing longer than the pessimists thought. But, it turns out, not by much. Global oil production is growing very slowly; the cost of new oil is skyrocketing; the quality of new oil is mostly lousy; and we continue to bump up right against the edge of global demand, which means that even a small disruption in supply can send the world into an economic tailspin. So details aside, the pessimists continue to be right in practice even if they didn’t predict the exact date we’d hit peak oil. It’s long past time to get dead serious about finding renewable replacements on a very large scale.