Well, the DC circuit court has ruled 2-1 that Obamacare subsidies apply only to exchanges set up by states, not to exchanges set up by the federal government. This is because one section of the law says that taxpayers can receive tax credits only if they enroll in a plan “through an Exchange established by the State under section 1311 of the [ACA].” The court ruled that a 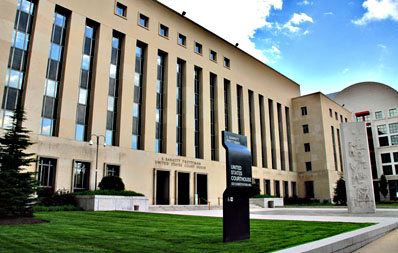 state is a state, and as far as that goes, it’s reasonable enough. Even if this was merely a drafting error, it’s pretty clear that the federal government isn’t a state.

The problem is that there’s more to it than that. The court is also required to ensure that its interpretation of a single clause doesn’t make a hash out of the entire statutory construction of a law. The majority opinion makes heavy weather of this for a simple reason: virtually everything in the language of the law assumes that subsidies are available to everyone. Why, for example, would federal exchanges have to report detailed subsidy information if no one even gets subsidies on federal exchanges in the first place? The court blithely waves this off, suggesting that it’s merely to allow the IRS to enforce the individual mandate. But that’s pretty strained. Enforcing the mandate requires only a single piece of information: whether a taxpayer is insured. It doesn’t require detailed information about eligibility for subsidies and the amount of the subsidies each taxpayer gets. The fact that all these details are required certainly suggests that Congress assumed everyone was getting subsidies.

The court, following the arguments of the plaintiffs, also makes a brave effort to figure out why Congress might have done something so transparently ridiculous as limiting subsidies to state exchanges. Their conclusion is that Congress deliberately withheld subsidies from federal exchanges as an incentive for states to set up exchanges of their own. On this point, Judge Harry Edwards was scathing in his dissent:

Perhaps because they appreciate that no legitimate method of statutory interpretation ascribes to Congress the aim of tearing down the very thing it attempted to construct, Appellants in this litigation have invented a narrative to explain why Congress would want health insurance markets to fail in States that did not elect to create their own Exchanges. Congress, they assert, made the subsidies conditional in order to incentivize the States to create their own exchanges. This argument is disingenuous, and it is wrong. Not only is there no evidence that anyone in Congress thought § 36B operated as a condition, there is also no evidence that any State thought of it as such. And no wonder: The statutory provision presumes the existence of subsidies and was drafted to establish a formula for the payment of tax credits, not to impose a significant and substantial condition on the States.

It makes little sense to think that Congress would have imposed so substantial a condition in such an oblique and circuitous manner….The simple truth is that Appellants’ incentive story is a fiction, a post hoc narrative concocted to provide a colorable explanation for the otherwise risible notion that Congress would have wanted insurance markets to collapse in States that elected not to create their own Exchanges.

There’s no evidence that Congress ever thought it needed to provide incentives for states to set up their own exchanges. Certainly they could have made that clear if that had been their intention. As Edwards says, this claim is simply made up of whole cloth. In fact, he says acerbically, the entire suit is little more than a “not-so-veiled attempt to gut the Patient Protection and Affordable Care Act “:

The majority opinion evinces a painstaking effort — covering many pages — attempting to show that there is no ambiguity in the ACA. The result, I think, is to prove just the opposite. Implausible results would follow if “established by the State” is construed to exclude Exchanges established by HHS on behalf of a State. This is why the majority opinion strains fruitlessly to show plain meaning when there is none to be found.

….This court owes deference to the agencies’ interpretations of the ACA. Unfortunately, by imposing the Appellants’ myopic construction on the administering agencies without any regard for the overall statutory scheme, the majority opinion effectively ignores the basic tenets of statutory construction, as well as the principles of Chevron deference. Because the proposed judgment of the majority defies the will of Congress and the permissible interpretations of the agencies to whom Congress has delegated the authority to interpret and enforce the terms of the ACA, I dissent.

Will the Supreme Court agree? Given the obviously political motivations of most Supreme Court justices these days, I think that’s hard to predict. A lot will depend on John Roberts. Having already betrayed his fellow conservatives by voting to uphold Obamacare, will he side with the government in order to show that he meant what he said and doesn’t want to invite an endless series of desperate attempts to kill the law? Or has he had second thoughts, and will therefore welcome this as a chance to essentially reverse himself? I can’t read his mind, so I don’t know. We’ll find out soon enough.

POSTSCRIPT: This ruling will, I assume, be stayed during appeal, so it has no immediate impact. The next step is for the Obama administration to either ask for an emergency en banc review from the entire DC circuit court, or to appeal directly to the Supreme Court. Either way, it will end up at the Supreme Court sooner or later.

POSTSCRIPT 2: White House press secretary Josh Earnest has confirmed that the administration will ask for an en banc review. Since the full court now has a liberal majority, they presumably hope they’ll get a more favorable ruling before heading to the Supreme Court.