Honest question here. I’ve been wondering about this for a while, but it crystallized last night after reading this Ross Douthat post about conservative foreign policy. My question is: Is there really a big foreign policy split in the Republican Party?

I hear about this a lot. Liberals love to write about it, for obvious reasons, but it’s not just liberals. Conservatives talk about it too. But where’s the evidence for the split? The answer is: Rand Paul. It almost always revolves around Rand Paul vs. Someone. Rick Perry. John McCain. Bill Kristol. Whatever. 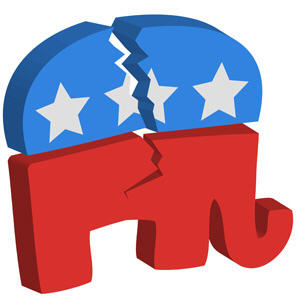 And since Rand Paul is a rising star with a Sarah Palinesque intuition for political theater, he’s gotten a lot of attention for his contention that Republicans should adopt a less interventionist foreign policy.

The problem is that there’s little reason to believe that Paul has had any more influence on mainstream Republican thought than his father did. The conservative coalition has always included both paleocons and libertarians who are skeptical of activist foreign policy, but their numbers have always been too small to carry any weight—and I don’t see much evidence that this has changed. It’s true that recent poll numbers suggest a declining appetite for foreign wars, but among conservatives those numbers are very, very soft. They change at even the slightest hint of aggression from Al Qaeda or Hamas or Vladimir Putin.

More to the point, I’ve seen no evidence of change within the mainstream of the party. Aside from Paul, who are the non-interventionists? Where exactly is the fight? I don’t mean to suggest that everyone in the Republican Party is a full-blown unreconstructed neocon. There’s a continuum of opinion, just as there’s always been. But as near as I can tell they’re nearly all about as generally hawkish as they’ve ever been—and just as eager as ever to tar Democrats as a gang of feckless appeasers and UN lovers.

So: Is this intra-party fight real? Once you remove the Rand Paul PR machine from the equation, is there anything left? Or is it mostly an invention of bored Beltway reporters trying to drum up some conflict?