I’ve previously nominated a version of the illustration below as chart of the year, and last year I wrote an entire piece for the print magazine as basically just an excuse to get it in print. Bill McBride’s version focuses on public sector payroll, not total public sector spending, but it tells the same story: after every previous recession of the past 40 years, the subsequent recovery was helped along by increased government outlays. In the 2007-08 recession—and only in this recession—the recovery was deliberately hobbled by insisting on declining government outlays. This is despite the fact that it was the worst recession of the bunch.

The result, of course, was that there was no Obama Miracle in 2011. In fact, there was barely even an Obama Recovery. If you think that’s just a coincidence, I have a bridge to sell you. 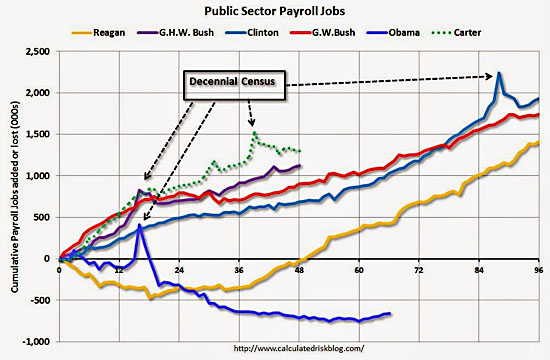