One of the scary aspects of climate change is the possibility of positive feedback loops. When Arctic ice melts, for example, it exposes seawater, which doesn’t reflect as much sunlight as ice. So more sunlight is absorbed, which makes the planet even warmer, which melts more ice, rinse and repeat.

Of all of these feedback loops, the scariest might well be the melting of the Siberian permafrost. As the permafrost melts, it releases large amounts of methane, which is a very powerful greenhouse gas. That warms the planet, which speeds up the permafrost melt, which releases more methane, ad infinitum.

The good news about the permafrost is that it’s probably not going to start seriously melting until the middle of the century or beyond. The bad news is 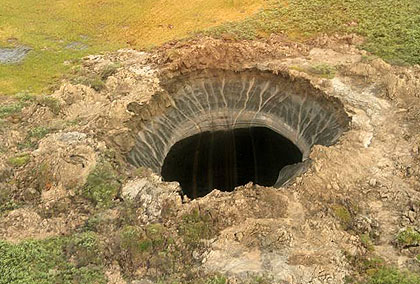 By now, you’ve heard of the crater on the Yamal Peninsula. It’s the one that suddenly appeared, yawning nearly 200 feet in diameter, and made several rounds in the global viral media machine….There’s now a substantiated theory about what created the crater. And the news isn’t so good.

It may be methane gas, released by the thawing of frozen ground. According to a recent Nature article, “air near the bottom of the crater contained unusually high concentrations of methane — up to 9.6% — in tests conducted at the site on 16 July, says Andrei Plekhanov, an archaeologist at the Scientific Centre of Arctic Studies in Salekhard, Russia. Plekhanov, who led an expedition to the crater, says that air normally contains just 0.000179% methane.”

This particular crater is apparently due to abnormally hot summers in 2012 and 2013, and one or two hot summers could happen regardless of changes in global temperatures. As usual, then, we can’t say for sure that this is a direct result of climate change. But what we can say is that it’s a canary in the coal mine. As the climate warms, we’re going to see more and more craters like this. Individually, we’ll never know if climate change is to blame. But collectively, there won’t be much doubt. And if and when the permafrost goes into an irreversible meltdown, you might want to pack your bags and move to Tierra del Fuego.