In the famous case of Lois Lerner’s missing IRS emails, it really does appear that the whole affair was the result of nothing more than a genuine hard drive crash combined with outdated IT procedures for saving backup tapes. Needless to say, this hasn’t stopped Republicans from yelling endlessly about conspiracy theories and the deliberate erasure of damning messages.

So let’s see. How do you think they’ll react to a case in which it appears that emails really were deliberately erased and hard drives really were destroyed? Before you take a guess, it’s only fair to let you know that this case involves a pair of Republicans: New Mexico Gov. Susana Martinez, who was the DA of the state’s 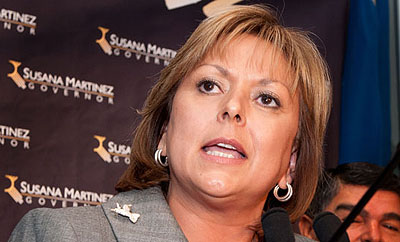 Third Judicial district before her election, and Amy Orlando, a close friend of Martinez’s who was her chief deputy DA and then briefly succeeded her as DA. Andy Kroll tells the rest of the story:

On Tuesday, Mark D’Antonio, the current DA in New Mexico’s Third Judicial district, released the findings of an internal investigation that concluded that large amounts of emails—potentially including those sought by the Democrats—had been “deleted and/or removed” during the period when the office was briefly run by Orlando, Martinez’s onetime deputy. Two of the four hard drives used by Orlando’s administration—hard drives that might have contained the requested emails—were missing. And investigators noted that all emails in the DA’s office were supposed to be backed up by a “special tape drive” in the office, but the back-up tapes were “blank and appear to have been erased.”

The report also noted that, under Orlando, the DA’s office misled a reporter who’d made his own request for similar records. The DA’s office told the reporter that the records he wanted didn’t exist because the office’s server “is routinely cleaned.” But after interviewing IT staffers, investigators concluded this statement “was inaccurate because IT personnel stated that servers were not routinely ‘cleaned’ and that the data should exist on a server.”

You may now submit your guesses about how conservatives will respond to all this. I’m predicting crickets at best, a smear campaign against D’Antonio at worst.