Hey, guess what? If you pass a photo ID law, you reduce voter turnout. The nonpartisan GAO studied the effect of photo ID laws and, after applying all the usual demographic controls, came up with this chart for Kansas and Tennessee compared to similar states without photo ID laws: 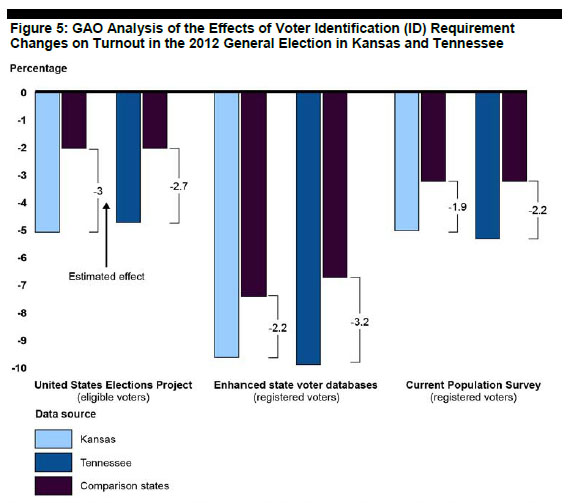 Voter turnout was reduced by 2-3 percentage points in both states. But of course there’s more to the story. Some groups were more strongly affected than others. Here are the results for Kansas:

….Race or ethnicity. We estimate that turnout was reduced among African-American registrants by 3.7 percentage points more than among Whites in Kansas.

Oh, and, um, maybe voter fraud was reduced. The Kansas Secretary of State responded to a draft of the GAO report by explaining that “if lower overall turnout occurs after implementation of a photo ID law, some of the decrease may be attributable to the prevention of fraudulent votes.” You betcha.