David Leonhardt writes about why the economy looks so bad even though unemployment has fallen below 6 percent:

American workers have been receiving meager pay increases for so long now that it’s reasonable to talk in sweeping terms about the trend. It 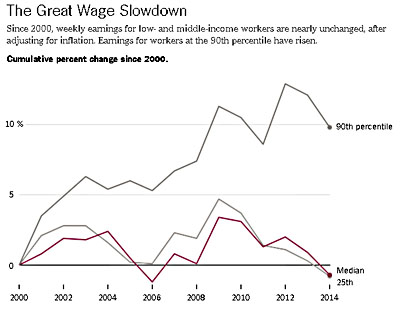 is the great wage slowdown of the 21st century.

I call this the Inflection Point of 2000, and it seems like too many things, all happening at about the same time, to be mere coincidence. In my piece last year about our robotic future, I suggested that much of it might be the barely visible early signs of a more automated economy, and I still suspect that may be part of what’s going on. But I don’t know for sure, and the evidence on this score is distinctly fuzzy.

And yet. It sure feels like something changed right around 2000. But what?