So here’s the big controversy of the day out in our nation’s heartland. Joni Ernst, running for a Senate seat in Iowa, is one of 21 Republicans who voted in favor of a “personhood” amendment to the state constitution. It says that “the inalienable right to life of every person at any stage of development shall be recognized and protected.”

That seems clear enough. It means life begins at conception, and that embryos will have the same legal protections as you and me. Ernst’s opponent, Bruce Braley, concludes, logically enough, that this would ban certain forms of contraception, prevent people from getting in vitro fertilization, and lead to the prosecution of doctors who perform those procedures.

Ernst says this is nonsense. “That amendment is simply a statement that I support life,” she says. Why, it’s just a nothingburger! Sort of like a resolution endorsing apple pie or Mother’s Day.

Today, Glenn Kessler wades into this dispute. He dings Ernst for “straining credulity” about the intent of the amendment, but he also has harsh words for Braley:

Braley goes too far with his scary scenarios, especially because he repeatedly said the amendment “would” have the impact he described. Ernst is on record of not opposing contraception—though she also favors punishing doctors who perform abortions. We concede 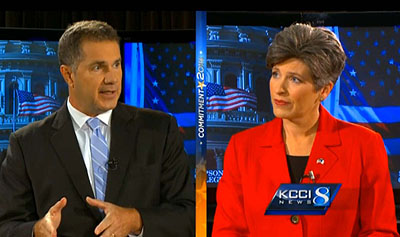 that the legal terrain in murky, and the impact uncertain. But that’s all the more reason not to speak with such certainty. Braley thus earns Two Pinocchios.

Ed Kilgore is dumbfounded by this kind of treatment, and so am I. I just don’t get it. Kessler is not some babe in the woulds. He knows perfectly well exactly what the goal of this amendment is. It’s possible, of course, that Democrats in Iowa will prevent Republicans from enacting enabling legislation. Or that the US Supreme Court will stand in the way. But why does that matter when the intent is so clear? Likewise, Ernst may say that “I will always stand with our women on affordable access to contraception,” but that’s plain and simple weaseling. And it doesn’t even matter. Republicans in the legislature can keep their hands completely clean and simply let activists take things to court. With an amendment like that in place, no judge could turn away a suit that asked for a ban on abortions or in-vitro fertilization or certain forms of contraception.

As Kilgore says, “Encouraging this lack of accountability, and engaging in the worst form of false equivalency, is just a sin.” All Braley is doing is calling out Ernst for the obvious implications of an amendment she supports. It’s not merely a “statement” and she knows it. But in our topsy-turvy world of fact checking, Braley’s plain description of the obvious real-world impact of Ernst’s amendment is somehow deemed more of a lie than Ernst’s slippery prevarications in the first place.

I don’t understand this. This isn’t a debating society. It’s not la-la land. It’s the real world, and it’s not partisan sniping to say that we all know what this stuff means in the real world. Shouldn’t that be the domain of a fact checker?