This is just raw data, and I suppose you can take it two ways, but here’s what a new Pew poll says about supposed Latino outrage over President Obama’s decision to delay executive action on immigration until after the election. Basically, the whole thing was overblown. It turns out that only about 9 percent of Latinos are angry about the delay. David Lauter summarizes the rest of the survey:

The Pew survey showed that Latino support for Democrats has receded on a couple of key measures, including party identification and a question about which party better represents their interests. 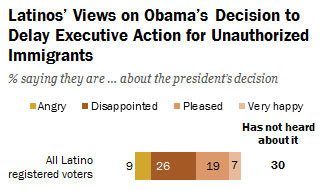 But the decline was modest, noticeable mostly by contrast with very high levels of support achieved in 2012, when Obama won reelection.

….Asked which party “has more concern for Latinos,” half named the Democrats and 10% said Republicans, with just over one-third saying they saw no difference. On that question, too, the Democrats’ standing has dropped from a high point reached during Obama’s reelection, but only to the level that prevailed during most of his first term. The Republican standing has not changed significantly.

Roughly speaking, Latino support for Democrats has dropped a bit from the sky-high levels of the 2012 campaign, when Republicans featured a presidential candidate who pandered to his tea-party base by refusing to support immigration reform and chattering instead about “self-deportation.” But Latino support has only dropped to about the same levels it had before then. In other words, not much has changed.

Obama made a mistake when he hinted that he might take immigration action before the election. That was politically inept, and sure enough, it sparked a revolt among Democratic Senate candidates running in red states. When Obama was forced to backtrack, it was a temporary embarrassment—but that’s all it was. Unsurprisingly, it turns out that most Latinos understand politics just as well as everyone else, and don’t really hold Obama’s actions against him. They know perfectly well why Obama did what he did, and they know perfectly well that Obama will probably keep his promise after the election.