C.J. Chivers of the New York Times has a long piece today about chemical weapons found in Iraq after the 2003 invasion. A few dead-enders are now gleefully claiming that Bush was right after all. Iraq did have WMD!

This is ridiculous enough that—so far, at least—the savvier wing of the conservative movement is staying mum about the whole thing. There are three main reasons for this. First, most of these weapons were rotting remnants of artillery shells used during the Iraq-Iran war in the 80s and stored at 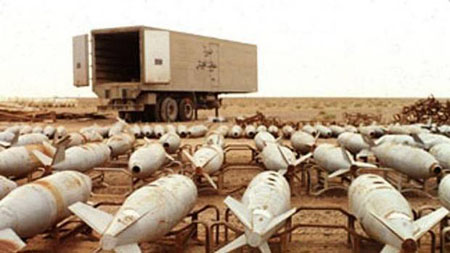 Iraq’s Muthanna State Establishment as well as other nearby sites. Murtaza Hussain of the Intercept explains what this means:

The U.S. was aware of the existence of such weapons at the Al Muthanna site as far back as 1991. Why? Because Al Muthanna was the site where the UN ordered Saddam Hussein to dispose of his declared chemical munitions in the first place. Those weapons that could not safely be destroyed were sealed and left to decay on their own, which they did. The site was neither “active” nor “clandestine” — it was a declared munitions dump being used to hold the corroded weapons which Western powers themselves had in most cases helped Saddam procure.

In other words, these shells weren’t evidence of an active WMD program, which had been George Bush’s justification for the war. They were simply old munitions that everyone knew about already and that were being left to degrade on their own.

Second, the Bush administration kept its discoveries secret. If any of this were truly evidence for an active WMD program, surely Bush and Dick Cheney would have been the first to trumpet the news. The fact that they didn’t is pretty plain evidence that there was nothing here to back up their prewar contentions of an Iraqi WMD program.

Participants in the chemical weapons discoveries said the United States suppressed knowledge of finds for multiple reasons, including that the government bristled at further acknowledgment it had been wrong….Others pointed to another embarrassment. In five of six incidents in which troops were wounded by chemical agents, the munitions appeared to have been designed in the United States, manufactured in Europe and filled in chemical agent production lines built in Iraq by Western companies.

Far from being a smoking gun of Saddam Hussein’s continuing quest for illegal WMDs, these discoveries were evidence that Western powers in the 80s were perfectly happy to supply illegal WMDs to an ally as long as they were destined for use against Iran. This was not something Bush was eager to acknowledge.

Iraq had no active WMD program, and it was an embarrassment to the Bush administration that all they could find were old, rotting chemical weapons originally manufactured by the West. So they kept it a secret, even from troops in the field and military doctors. But lies beget lies, and American troops are the ones who paid the price. According to Chivers, “The government’s secrecy, victims and participants said, prevented troops in some of the war’s most dangerous jobs from receiving proper medical care and official recognition of their wounds.”

Today, the consequences of our lies continue to haunt us as the rotting carcasses of these weapons are apparently falling into the hands of ISIS. Unfortunately, no mere summary can do justice to this entire shameful episode. Read Chivers’ entire piece to get the whole story.