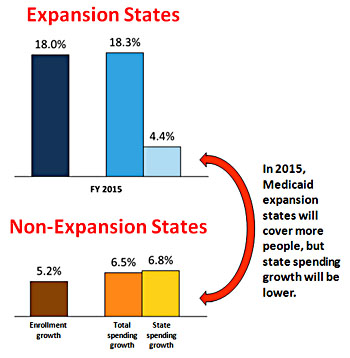 Here’s a remarkable chart cobbled together from a survey of state Medicaid directors by the Kaiser Family Foundation. It’s a little ugly, but bear with me.

But most of that spending growth is covered by the federal government. It turns out that states which accepted the Medicaid expansion expect state spending to grow more slowly than in non-expansion states.

In other words, the non-expansion states really are shooting themselves in the foot. They’re enrolling fewer people, but paying more to do it. They actually prefer spending more money if the alternative is spending less but helping their own poor with medical coverage. Hard to believe.